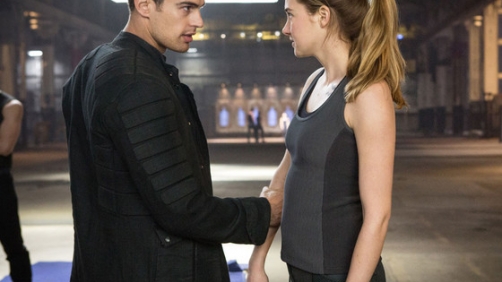 If there’s one thing Lionsgate/Summit have figured out, it’s how to milk YA franchises for all they’re worth. When it came time to say goodbye to “Twilight,” the studio decided to grab money from the fans twice, by extending “Twilight: Breaking Dawn” into two films.

That is a really unfair assessment. I know I’ve talked about this before, but the Twilight books actually have a decent plot mixed in with all the googly eyes lovey dovey gaggy romance. I have said before that the first three books could be condensed into two, maybe one by cutting out all the awful romancy description of Edwards eyes and simply distilling the story down to, well,the story. Breaking Dawn however is an entirely different story. It is, by FAR, the best book in the series, and a good book in its own right. I was shocked at the change of tone, the good story, the good writing. It was a night and day difference from the previous books. I honestly had no idea how they were going to make that book into one film. So they didn’t and I was happy about that. So Kevin’s statements above seem extremely unfair and poorly thought out to me.

Also an extremely unfair statement. The Hunger Games is a great book series, and so much happens in the third book that I fully believe a fourth movie is warranted.

Now, with “Divergent” their latest YA hit, they’re doing the same.

Lionsgate announced that the trilogy finale, “Allegiant,” will be split into two movies, with part one dropping on March 18, 2016 and part two arriving a full year later on March 24, 2017.

It really irritates me when people write inflammatory things for the sake of writing inflammatory things so that they feel their writing will be interesting or generate page views. That is what it seems like Kevin is doing here. I’m in more of a wait and see mode. Innocent until proven guilty. Not everything studios do are money grabs. Some things certainly are — the studios do not exist solely for our whims and discretion after all. They exist to make a profit, and if we’re willing to give them more money for an extra film, then they are welcome to do that. But I fully expect this is a decision driven by the creative team and not the pencil pushers. My guess is that the writers really did wonder how they were going to fit the material in one film and decided to not even try. It’s not that hard to imagine.

Let’s look at another beloved film franchise that did this that I am VERY familiar with: Harry Potter. Having read and loved the series, there was something I was always worried about. Knowing that some of the films already felt truncated leading up to Harry Potter and the Deathly Hallows I wondered how they would fit the explosive and satisfying last book into one film and make it feel like the story was not truncated or that they missed important plot details.

My issues with some of the stupid decisions David Yates made in the eighth film aside, there’s just not a good way they could have fit that last book into one film that wasn’t four hours long. So my point is, if this is what it takes to tell the story right, I am all for it.