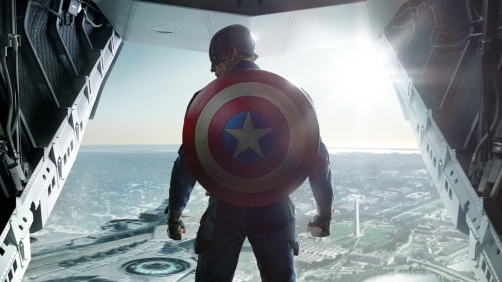 Hey look, it’s another Marvel film that’s really, really good. Can I get a nickel for every time I say that? Because if I can, I’ll be a rich man. Someday, Marvel will have some sort of downfall that will be a sight to behold indeed, but that day is not here — nor, I suspect, will it be for a while to come. One of the things Captain America: The Winter Soldier shows us is that Marvel has some very savvy filmmakers in their camp. And I mean savvy on many levels. For starters, this film knows what it is, it knows its place, it knows how to inject humor at just the right spots, and what needs to be serious and heavy.

The film is also very aware of where we are as a culture, what’s going on, how to leverage that, and how to have a message that would be more or less pretty universally accepted — and yet it never feels preachy. This is really a winning combination if you ask me.

A Captain America for The Whole Word

So how do you make a Captain America movie for a world that is moving very fast down a road that is in many ways, for better or for worse, a very unicultural place? Films made in the U.S. are no longer released just in the U.S. (and vice versa). And yet Marvel has here a character named Captain America. How do they make that work? It’s genius really: they leverage something that is bothering most of us as Americans, and that has relevance to the rest of the world as well.

We are living in a post-Edward Snowden world, a post-Julian Assange world, a post-Wikileaks world. We’ve taken a look at the watchers and we’re asking the question, who’s watching them? Into this climate comes Captain America: The Winter Soldier and puts its own comic book twist on that question.

You see, the glue that has held the Marvel Universe together since Iron Man is the appearance of a representative of SHIELD — often in the form of Nick Fury. And then we went full-blown SHIELD in Joss Whedon’s The Avengers. They are a big, shady, shadowy government organization. And as we’ve started to see in Agents of SHIELD, something may not be quite right. And in fact, something is definitely not right. Since almost its inception, the organization has been corrupted and infiltrated by Hydra.

Even though I knew something big was going down in Captain America: The Winter Soldier when I went in to see it, I was still somewhat taken aback by this revelation. But this is actually the appeal of the film. It plays up our current cultural feelings and fears that our government has something to hide. Yes it’s all fictional comic book stuff going on in this movie, but pop fiction, fantasy, and sci-fi so often has its roots in the current happenings of the culture. We all know deep down there’s some shady stuff going on in the U.S. and so does the rest of the world.

This is why Captain America appeals not only to just an American audience, but has truly world-wide appeal as any analysis of any sort of the box office earnings will tell you.

What Does It Mean?

There’s a lot here to cover. First, what does it mean for the film? I’ll tell you that I wasn’t sure what I thought when I walked out of that theater having seen this Marvel Cinematic Universe shattering film. In the back of my head I knew that it probably meant I liked it a lot and it was a really good film, but it was hard to process. What is the larger impact, how did the past play into what’s happening now? What are the ramifications? My stars, they just burned SHIELD to the ground.

Ultimately, I did like it after careful consideration and digestion. Many have called it their favorite Marvel film to date. I’m not quite there — The Avengers still holds that spot for me, but I understand that sentiment and believe that it is not unwarranted.

But what does it mean for the universe beyond this film? Well there are two angles to consider. I think that the first is that while in the back of the heads of the producers they may have been considering the rest of the universe, they were also considering this film first and formost. The question they were most certainly asking themselves was, “how can we up the ante?” The answer is, let’s blow up SHIELD, which we’ve been hinting may have some corruption anyway. But secondarily, by approaching it in this manner, it does help the universe as a whole. Take risks, do big things, don’t do pointless things and the great story will do well. How will this affect The Avengers: Age of Ultron? I really have no idea. But with Joss Whedon at the helm, I think it’s safe to assume he was basically handed a gold mine with the events of this film as the backdrop.

Yes this is a Captain America film, and as such it should be primarily about Steve Rogers. And it was. But the film also doesn’t shy away from elevating a couple other characters to high status. Black Widow, a.k.a. Natasha Romanoff, is heavily featured in this film. We learned or gathered from the clues dropped in The Avengers that she has a history that isn’t snowy white. She has things to hide, she operates a bit in the shadows. She’s completely different from Steve Rogers. Featuring her heavily in the film with Steve worked really well, not only for her character and development, but for Captain America’s development too. He’s not very worldly wise and he needs some of that from Romanoff. But it also helps teach him where to draw the line — to help define what makes him Captain America.

And we get to see Natasha Romanoff grow as a character perhaps more than any other Marvel film. She has to make some tough decisions and ultimately does the right thing regardless of the consequences to her.

Anthony Mackie’s The Falcon (Sam Wilson) also has a great rapport with Steve Rogers and adds a real flare and zest to the film. Yes, on the surface the whole flying mechanism is a bit hokey, but hey, it’s a comic book movie, you can suspend some disbelief, right?

But that rapport, you can get away with a lot of other stuff when the chemistry works. The film opens to a scene between Cap and Falcon, and while the scene is funny when Rogers continually runs laps around Wilson, always calling out, “on your left” as he runs by to the great annoyance of Wilson, it also instantly shows the chemistry available.

One thing that I found particularly well done in this film is I never felt like dialog existed for the sake of plot exposition. Sure an argument can be made that all dialog is plot exposition, for without dialog there is usually no plot. But this film does a remarkable job of never making us feel like we the audience are being talked at. As just an example, there’s a scene with Arnim Zola that in retrospect is a massive information dump for the audience, but it doesn’t feel that way. It’s an interesting, menacing, and captivating scene. I found this to be the case throughout the film. Not once did I cringe because any given line only existed because the audience needed the information. It’s called respecting the audience, and many filmmakers need to learn this concept.

Ultimately this film does have a couple of flaws that keep me from liking it quite as much as I would like — though they are small and I have seriously considered raising my star rating.

The primary thing that bothered me is that the Hydra infiltration plot seems to mostly come out of nowhere. Yes you can look back and compare notes with the show Agents of SHIELD and say, yes, I see how the pieces fit. But it’s still a tad of a stretch. And there were no other hints about it in any of the other films. I wish they had woven little tiny bits and pieces of this thread throughout the films so that when we got here, we could look back and say, “yep, didn’t quite see it coming, but it makes sense.” As it is, it feels like it has come from a little left of field.

The other thing that I feared going in to this film turned out to be correct. I had been hearing that directors Joe and Anthony Russo’s camera style was the shaky cam I hate so much. And at times it very much was. They loved to shoot the action scenes handheld, up close, and personal. Unfortunately, when I talk about this, I feel that this is most often a cover for very poor choreography. Usually it’s sort of like, “hey, if the audience can’t follow the bad choreography, but it’s all fast and frantic, it will work right? It will be edgy and modern and have a lot of energy to it.” However in the case of this film, from what I could tell there was actually good choreography, but made hard to follow because the camera would be whipped around so much. It’s a doggone shame.

Yeah, this flaw gets its own subheading. The film is called The Winter Soldier. Why then, does it feature so little of The Winter Soldier? Bucky Barnes as The Winter Soldier is barely more than a namesake for this film. Yes, The Winter Soldier shows up in this film. So what? It’s not very much about him, he has very little screen time, and he’s not important to the plot. He could have been anybody. Seriously. His former friendship with Captain America really doesn’t come into play in helping to resolve the plot. It’s interesting, and in the end Barnes is starting to remember, but it is not a device that is used to help Cap get done what needs to get done. Most of this film is well executed, but this aspect is not.

Overall, this film is a huge win. Obviously it’s setting all sorts of box office records. But more than that, it’s a compelling story, executed in a great way, with great acting and directing behind it, and a great universe with more films and good times to follow.

This film could have rested on its laurels. It could have been just another installment in the Marvel world, and we all would have been happy and not known the difference. But Marvel was not content with the status quo, nor were they content to just leave a good thing alone. They were willing to take risks, burn bridges, and tear down things that have been carefully thought through and built up over time. And the risks have paid off. I highly recommend this film. It is certainly one of my top films and have no doubt that it will make it easily into my top ten for the year.