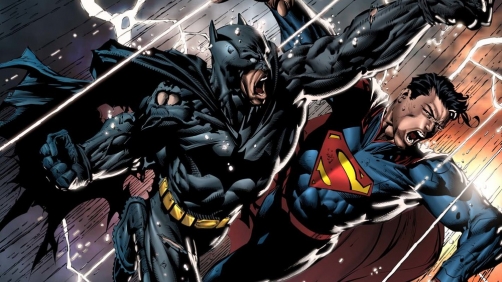 Yesterday came the official confirmation from Marvel Studios that they will open Captain America 3 on May 6, 2016, where it will face off against Warner Bros.‘Man of Steel follow-up, Batman vs. Superman. This sort of blockbuster clash of superheroes hasn’t been seen before, and has ultimately divided many portions of the community in support of one side. Many remain skeptical that Batman vs. Superman will actually arrive on that date, as the film was originally scheduled to debut on July 17, 2015, but Warner Bros., much like Marvel, says they’re not backing down.

“It doesn’t make a lot of sense for two huge superhero films to open on the same date but there is a lot of time between now and 5/6/16,” Dan Fellman, president of domestic distribution for Warner Bros., said in an interview with Bloomberg.com. “However at this time, we are not considering a change of date for ‘Batman vs. Superman.’”

I don’t care who was first, I don’t care if Warner Bros. wants to stomp their feet and cry foul, I don’t care about any of that. I think regardless of all that, it is pure, foolish stupidity to try to pit Man of Steel against the same release date as Captain America 3. D.C. just doesn’t have the comic book clout or capital to do that right now. They need some good solid wins, and this would not help with that.