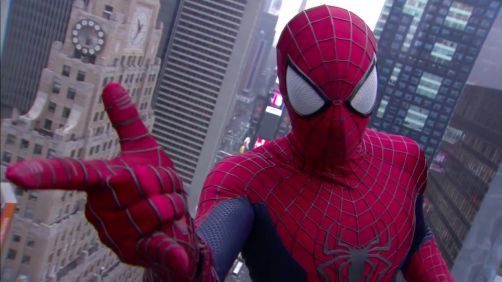 What is The Amazing Spider-Man 2 about?

It’s about a man gifted with extraordinary powers who, through hard work and perseverance, finally manages to get his girlfriend killed.

This is awesome and you should click through and read every. single. word!

Well, yes and no. Yes because Harry has access to all his father’s crazy secret projects — which, by the way, is literally in a folder titled “Secret Projects” — and no because that neurogenetic disease that his father succumbed to at the age of 50-something decides this is the week to put it into high gear and start giving Harry big neck zits. I should note that the movie doesn’t acknowledge the disease’s inexplicably rapid spread in Harry, Harry just decides he needs the cure in the next three days or it’s all over.

Then how does Harry become the Goblin?

Because of course Oscorp kept some of the spider venom in the “Secret Projects” basement. Harry finds it, instantly injects himself with it despite the fact that no one has any clue what it does and even though had the spider-venom worked perhaps Harry’s dad would have taken it and not died earlier in the movie and despite the fact that Harry should, by all accounts, have at least 30 more years before the disease kills him so there’s no rush whatsoever. The disease transforms him into the weirdo you’ve seen already, and at the exact same moment the transformation is complete a random door opens up in the same room Harry’s in, containing the new Goblin armor.

Seriously, I think Rob hits every single plot annoyance I had in a funny and uncomfortably close to home sort of way. I’m tempted to lower my star rating of the film after reading this but I know that would be an over-reaction.