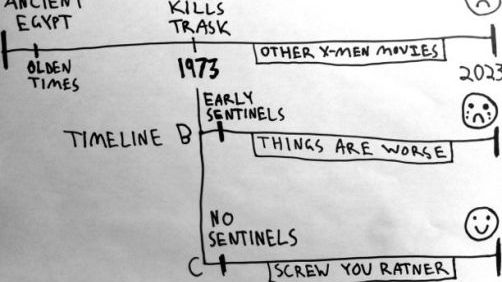 So what follows is not meant to nitpick the plot of Future Past. Rather, this is an inquisition, an attempt to seriously understand what the space-time continuum really looks like after it has been twisted into fifty pretzel-spirals of insanity. SPOILERS FROM HERE.

This is wonderful. I thoroghly enjoyed reading every word and I think you should to.

At the end of The Wolverine, Logan has bone claws. In the dark future of Future Past, he has adamantium claws.
Yes.

Explain.
Um, maybe Magneto gave him adamantium claws? Like, he just had some adamantium lying around?

Be sure to read to the very end!