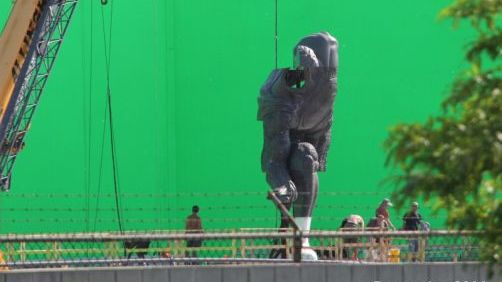 Filming for Batman v Superman: Days of Justice is still in its early days, but there have been a few interesting reveals to come from the set since production began last month. Beyond the LexCorp building, set photos last week revealed a mysterious and clearly unfinished Superman statue. According to Batman-News, the reported 15-foot tall structure is built in the Zack Snyder-directed film to celebrate Supes “saving the Earth” in Man of Steel. ”My source on set said that they held a big ceremony to unveil the big Superman statue,” explains the site. ”Batman v Superman takes place about two years after the events of Man of Steel. Gotham and Metropolis news trucks and helicopters were on the scene to cover the Mayor’s speech and the statue unveiling. Elementary school kids wore ‘Superman Survivors’ shirts and helped pull a sheet off the statue for the big reveal.”

Yes, yes, honor the hero who brought the desctruction right into the city in a fit of anger instead of keeping it out in the fields where far less people would have died. Makes sense to me.