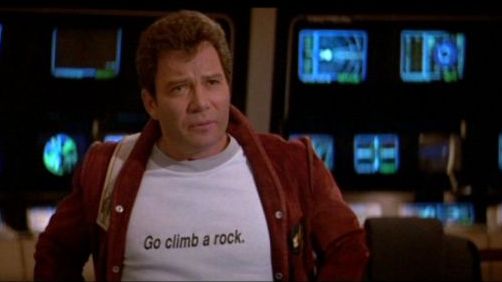 Trek V was a gross miscalculation on almost every level. Trek IV was funny and hugely successful so the mandate was to bring the funny again. Some of the humor works. Some of it is simply juvenile. Going after God. Really? Haven’t we done the Supreme Being thing already guys? God never works. The non-ILM special effects are from hunger and always take me out of the story.

Then there’s the script. I know I recently accused The Undiscovered Country of numerous plot holes and contrivances, but Trek V is littered with them.

In order for the Enterprise to be successfully hijacked all the necessary elements are front-loaded into the story from the get-go: a poorly designed vessel with numerous flaws, a skeleton crew and no experienced commanders in the quadrant. As Jim Kirk sneers to Admiral Bob, “Oh please.” Let’s throw in some transporter malfunctions to ramp up the tension and give Bill Shatner an excuse to ride a horse. Spock has a half-brother? Gene was really pissed about that one.

I mostly agree with this article including the fact that this movie did in a couple of key ways get back to the heart and soul of our three pillar characters akin to — better even than what we saw in the series.

But this is my second least favorie Star Trek film. It falls just short of the worst Trek film by a hairs breadth. That honor goes to Star Trek: The Motion Picture in my estimation.