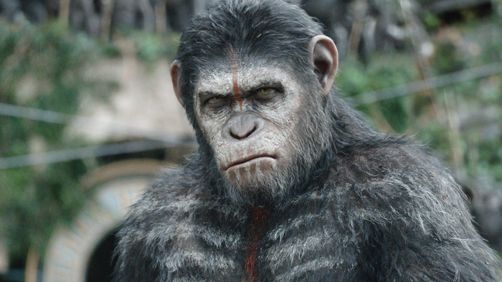 So my excuse is that I simply don’t find apes — the animals — all that interesting. Imagine that you simply don’t find gorillas, monkeys, chimps, and the like to be… clever beasts. That’s sort of how I feel. I like animals, but I don’t especially favor these. I’ve never been interested in them (with the one exception of Donkey Kong, whom I’m very fond of because he was a part of my early childhood).

I’m very happy to say that I’m viewing Dawn of the Planet of the Apes with a fresh perspective on the franchise. My opinion is untainted. Does this give my experience watching the film an edge? Definitely. Does it mean I will have brilliant insights about Apes for this review? Not necessarily.

But right here I want to say that I’ve become an Apes fan overnight. It makes for fun sci-fi set in a gritty world with a riveting struggle: survival of the fittest.

I’ll do my best to keep this spoiler-free.

The top of the film starts with a montage of news reports covering the last ten years leading to the events in Dawn of the Planet of the Apes (not boring and actually important bits of information sweep over the face of the earth with some artistic visual effects). We learn that the human race is going extinct. Apes are suspicously uprising and colonizing. Human civilization has died on the face of the earth.

Right after this prologue montage, we see a tight close up of an ape’s eyes. They appear somewhat human, in that they seem to invoke human-like emotion and thought behind the twitches on the worn ape’s face. The shot pans out very slowly to reveal the ape is Caesar, the one from the last film (Rise of the Planet of the Apes), but much older now.

Caesar is riding a horse like a veteran war general. He’s surrounded by his ape peers, and they are prepared for some sort of attack….

Caesar is the cheif of a few hundred apes, the exact number in their tribe is difficult to tell. They haven’t seen humans in several years, and what they remember of them is bitter-sweet (or just bitter). They miss the good people, but they would rather be left alone than be tormented by the bad people again.

They are teaching their young to read and write. They have warriors, nurses, teachers, builders, and civil leaders among them. They are a fledgling primitive society of apes of all kinds. They make their homes out of trees in a dense forest somewhere out west in America. They live in a boring yet unstable time of peace.

Little do these apes know that their settlement is very close to a significant man-made power source: a hydroelectric dam on the outkirts of what used to be San Francisco, California. The remnants of the human race from all parts of the country have come together and live in makeshift shacks along the edge of the dilapidated city. Their only hope for survival is to get power from the dam and make contact with people elsewhere in the world. The people fear that if they can’t get power that they will loose vital survival resources.

When a man happens across apes in the woods, it is the beginning of escalating discord and hostelity between their kinds. Just a few men and a few apes have to decide what will become of their species:  whether they will they have war, or live in peace. Rabble-rousers among them might tear their societies apart.

Watch this movie for Caesar

As the leader of his ape tribe, Caesar (played by Andy Serkis then brought to life as an ape using CGI) makes the film surprisingly compelling. He is the first character we see, which quickly establishes that he is the main protagonist. If it weren’t for Caesar, we might not have a compelling story.

He is wrestling with leadership strategies. He doesn’t want to be impulsive, like so many of the other hostile apes. Koba, played by Toby Kebbell, one of Caesar’s peers, is always ready to start a dirty fight. The tribe reveres Caesar, but they are afraid that Koba might be right: that they must go to war with humans if intelligent apes want to take dominion over the earth. Fighting might be their only way to survive, because the assumption goes that the world isn’t big enough for the two intelligent species.

Mankind takes the back seat in Dawn of the Planet of the Apes. It feels like they are the alien race that’s encroaching on apekind in ape’s world.

Jason Clarke plays Malcolm, a husband and father that was presumably an engineer in a former life in man’s world. He has teamed together with Dreyfus, played by Gary Oldman, who leads the misfit humans that live in San Francisco. Together, these men are organizing efforts to reactivate the long-forgottem hydroelectric dam in order to power the city. Then, it’s Dreyfus’ plan to make contact with anyone in the world and see about saving the people, because they are almost out of survival resources — like food, medical supplies, and power supplies.

Caesar is compassionate on the humans, but he might do his kind a huge disservice if he helps humans. Also, Dreyfus and many other people don’t trust the apes. If either side so much as defends itself from a minor violent attack of any sort, it will be assumed war is the only solution. Yet neither man nor ape wants war at this time. Well, it’s actually hard to pinpoint, because Dreyfus might want a war…

Caesar wants to be an effective leader: look out for the interests of his wife, offspring, the tribe, the wellbeing of their homestead… and show some gratitude to the humans. He recalls Will Rodman (who was played by James Franco in Rise of the Planet of the Apes). Rodman was a good man that genuinely nurtured and mentored the young Caesar. Now, Caesar just wants a better future for the new age of man and ape.

The apes don’t like guns. Is this a political commentary?

One of the problems the apes have with humans are their guns. They dislike other weapons also, but they single out guns. Unlike other films that use this to be a bully pulpit for filmmakers’ political opinions, the concern for the apes in this film makes a lot of sense.

Imagine for a second what it would be like to feel inferior to the human race and know that you are an intelligent species all the same. You would feel handicapped when confronting humans, and all the more if the people had boom-boom sticks that would kill you faster than you can peel a banana. You want to think that you are better than humans, and if you are going to prove that to yourself, you have to equalize the competition. Cancel out guns, and you have nothing to fear from humans, right?

I was convinced for this reason that the political themes some will pick apart in Apes were actually effective plot devices, rather than the pushy themes you get from lesser films. Dawn of the Planet of the Apes is great at storytelling. If you mind the politics of this story you are missing the point. You are overlooking the craftsmanship. You aren’t aware of the greater message of the story, which I will go into some other time on the Movieology podcast (after the film is out for home entertainmnet).

Everything looks so real

The apes never appear like CGI. The human performances of their characters shines through. Kudos are really due to the animators and other filmmakers that made such a story come to life with outstanding production values. This film looks really expensive, because it was (a $170 million budget). Hollywood’s talents were put to great use. Matt Reeves is a gifted director.

But more than the characters, the world looks authentic. The city of San Fransisco is a mess. It’s overgrown with foliage. Rust has overtaken the Golden Gate Bridge. Man-made buildings have gone neglected. Several recognizable parts of the city are represented with accuracy I’ve not seen in a story like Dawn of the Planet of the Apes’ before.

On a technical level, I geeked out about the design work. For entertainment’s sake, seeing our cities waste away in the absence of our prosperity was… eerie.

The story is set in an alternate reality of our times that is very dystopian. It makes for a compelling action film, but I’m tired of these “man against the odds” stories. When done poorly, they grate on my nerves. When done well, as in the case with Dawn of the Planet of the Apes, I feel a little depressed. I want to take a shower and play with my kids again to snap out of deep dark thoughts.

I know that bad things happen in this world, and I know some of these films can offer great entertainment as well as insights into culture that I should glean from. But stories where the human race is all but extinct lend themselves to so much chaos that they disturb me on an emotional level. If I linger on these stories for too long, I will get depressed about imaginary problems. I think some people like to worry about the worst case scenarios, and a movie like Dawn on the Planet of the Apes will be invigorating for these people. I’m not turned on by such distressful naratives.

There are a few lighthearted things in Apes, but not much. Nothing is comical or happy on screen for more than a few seconds at a time. True to its serious nature, Apes will leave you very sober. Just a little too sober for my tastes. I know this is great filmmaking, but its not in one my favorite genres.

Watch the movie if you appreciate Andy Serkis’ performances, as I think his performance of the ape, Caesar, is his best to date. Although nothing was poorly done in this movie, the memorable characteristic will be Caesar.