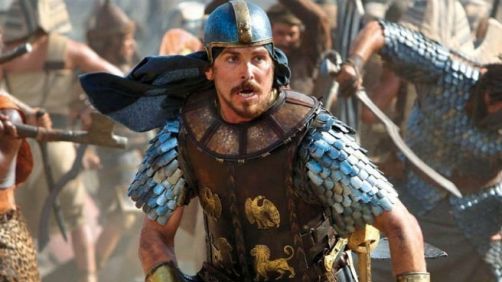 Enter the director of Gladiator, Ridley Scott. Yes, he can be a bit hit or miss, but he has done a few great films over the years. And I bring up Gladiator because it’s probably the most relevant for a film set in ancient egypt of Bible times. Gladiator is one of my top all time films and possibly the best film Ridley Scott has done to date (I know these things are subjective, and I certainly haven’t seen all his films). Purley from an artistic perspective, I think Ridley Scott is the right man for the job.

But what about the Biblical and/or historic perspective? Well, he has at least indicated that he’s sticking close to the original story:

In this one the characters are conventionally historic. There have always been discussions about Moses. Was he in fact one of the princes of Egypt? I’ve accepted the conventional story on the origin of Moses. As I do more and more movies I get more and more centralised on the characterisation. This is a challenge because you are dealing with a very, very delicate subject. It’s like politics - you don’t necessarily want to talk about it because it’s very personal.

But I’ve been down this road before. I am fully prepared to be dissapointed by this film. At the same time, I can’t help but have my curiosity at least a little bit aroused. I’ll certainly see the film, which arrives in theaters on the 12th of December. Check out the trailer: