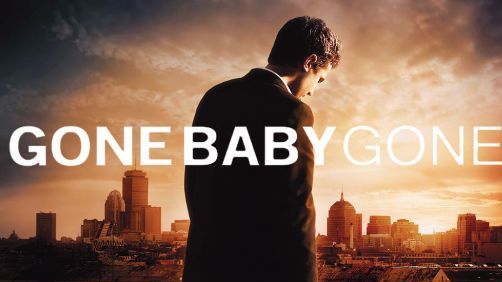 The story centers on two Boston-based detectives, Patrick Kenzie (Casey Affleck) and Angie Gennaro (Michelle Monaghan), during their investigation of a little girl’s kidnapping - a case that turns unexpectedly personal as it develops. Affleck and Monaghan are sturdy leads backed by a strong supporting cast, including Morgan Freeman, Ed Harris, and Amy Ryan (in a fantastic turn as the missing child’s distraught mother). Casey’s brother Ben, meanwhile, proves himself far more adept behind the camera than he ever was in front of it.

Up until around the final half hour, Gone Baby Gone is really good: a tense, well-oiled neo-noir thriller with switchblade-sharp dialogue and an assured pace. But the final act is what raises this film above and beyond the standard rent-a-cop dramatics. It’s a shame I can’t explain why without passing spoilers around like candy.

I’ll say only this: in a genre that often revels in muddy ethics, that condones and even celebrates consequentalism, Lehane’s story swims unapologetically against the current. As with Prisoners (my review), the moral compass here remains true and intact, even when the characters take a beating. Right and wrong are not amorphous blobs conforming to the deceitful impulses of the human heart. Gone Baby Gone acknowledges this - and is a superior film for it.