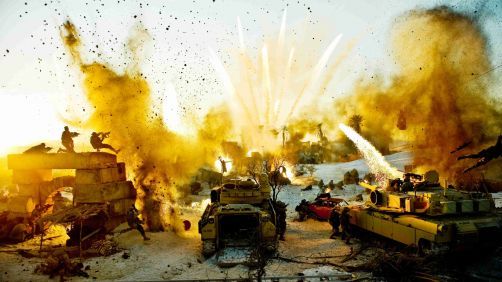 Transformers: Age of Extinction is a relentless assault on the senses that somehow still managed to bore me to tears. It’s a 2 hour and 40 minute film that features giant robots riding enormous robot dinosaurs killing bad giant robots, yet is devoid of any meaningful thrills or excitement. Filled with explosions, flying glass, a laughably incoherent plot, and paper-thin characters who behave completely nonsensically, this movie dares you to try and look away from its mess, then punches you in the throat with its runtime as your body urges you to head for the exit.

But maybe that’s okay. Because Transformers: Age of Extinction is still going to make a billion dollars worldwide. It’s the most Michael Bay film that Michael Bay ever Bay’ed. This film is the logical culmination of film as commerce. Let’s explore why.

I’ve been saving this read until after I had been able to see the film. I saw it last night, so naturally, Chen’s article was the first thing I read this morning. He nails it. Trans4mers is a hot mess. It’s overlong, under developed with very little plot and almost no character development.

I plan to write a full review later (tonight if I can wrangle my schedule), but for now, read Chen’s article and weep for the state of cinema.