Guardians of the Galaxy — Review 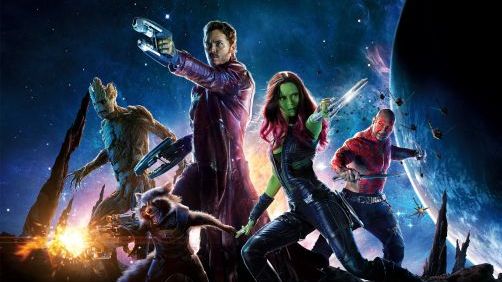 That awkward moment when a character who said only three (well okay, five, technically) words throughout the entirety of the film had way more character development than any character in Man of Steel. This is the power of the Marvel creative team at this particular juncture in history.

Guardians of the Galaxy is ostentatious, outrageous, silly, irreverent, and altogether self aware. Where the previous Marvel film this year was a very serious affair with a few funny moments, this film is the polar opposite — a very funny affair with a few serious moments.

I’m not sure this film actually lives up to its name. The idea that they are the Guardians of the entire galaxy would imply stakes that are much higher and more encompassing than what we saw in the this film. But it turns out, that doesn’t really matter. As usual, what drives good films are the characters and that’s what drives this film. We have really great characters to work with. I again find myself with little knowlege of this universe since I am not a comic book geek, but I also find myself really loving the Marvel comic book films. So I have no idea if these are just good characters, or whether they were made to be good characters. Whatever the case, it’s the journey that counts, and Director James Gun makes the journey count in great ways.

Peter Quill (Chris Pratt) takes the lead roll in this film, and he’s absolutely wonderful. From his first moments on-screen trying to get people to call him Star-Lord even while apparently trapped and unable to escape, to his pathetic attempts to rally the troops to fight the evil Ronan, he brings a wonderful sense of wit and fire to the film.

But there’s a little more to the story here. The characters are what makes the film, and this characters journey is a good one. This may be the only Marvel film that made me tear up in the first 5 minutes or so of the film, and it was this character as a child that made it happen. Seeing the little guy go through the pain of losing his mother then being whisked away to live the rest of his life away from terra firma really frames your understanding of your character and changes the way you would otherwise view a goofy guy. And you kind of understand how he became the guy being hunted by bounty hunters.

A Tree and His Talking Raccoon

Speaking of bounty hunters, we’re introduced to the talking raccoon and his tree friend about 15 minutes into the film, and they’re trying to capture our lead character for — no go figure — a bounty. Now you might be thinking, “Oh great, another CGI character. Ho hum.” But let me tell you, this angry little raccoon steals the show all the time. He easily got the most laughs in the theater I was in. He was angry, bitter, had a chip on his shoulder — and most importantly he had a heart. It was immediately apparent, but you came to realize it pretty quickly. He’s sort of like a CGI raccoon Han Solo. You think he’s just in it for himself, but he proves you wrong.

But then, if he’s Han, where’s Chewie. Never fear, his alter ego is in this film as well. Groot can only say three words, but he sure can say them with a lot of different emotions. Early on in the film they made fun of him for it. As the film progressed, the other characters began attributing various meanings and phrases to his varied delivery of the line, “I am Groot” which of course is the most hilarious thing ever.

But what you think of at first as big dumb muscle turns out to have the most heart of the entire film — maybe even the entire Marvel Universe.

[HERE THERE BE SPOILERS]

The final scene with Groot is the only other scene that brought some tears to my eyes. Throughout the film you start to see that Groot has a bond with Rocket, and that he has even come to care for the other characters to an extent as well. As the ship is going down and everyone is about to die, Groot grows himself to gigantic proportions to encase and shield everyone from being killed. Rocket is very upset about this insisting that Groot stop or he’ll die. Groot does not stop and Rocket quietly asks, “why are you doing this?” For the first time, Groot changes up his language a little to say “we are Groot”. And like that, this film shot way up in the character development department. It was one of the more touching moments I have ever seen in a comic book film.

Our two remaining team members also turned in some solid performances. Believe it or not, Dave Bautista of the WWE turned in a pretty great performance as Drax the Destroyer. I would not have believed it if you told me. I mean, seriously, the WWE? But, as it would turn out, Marvel knows what they are doing and the decision to cast Bautista was a good one. I’ll tell you this, nothing gets over his head, because if it did, he would catch it!

The performance is delivered with such dead pan. He’s so serious, and takes everything exactly as stated that the humor seems effortless.

Zoe Saldana’s Gamora was also a pretty solid part of the team and film — even if I feel like her character arc was both rushed and under utilized.

Malekith / The Other / Ronan / Thanos

Which one of these was the villain? Does it matter? All of these characters lack dimension and development. It’s become a slight problem for Marvel in my opinion. I could to tell you much about Ronan because not much was offered. Like Malekith before him, little is known about his motivations, what this cleansing he is talking up is all about, why he’s mad at people and life in general. We don’t know him or what makes him tick. And it’s not like Marvel can’t do villains right — look at Loki for evidence that they can do villains very right.

I didn’t put The Winter Soldier, Red Skull, Ivan Vanko, or others in this sections headline, but they all apply here two. They all suffer from the Marvel villain disease. Look, I realize that the most important characterization you can do in a film has to do with the primary protagonists, but you do your films a great disservice if the villains only exist as stepping stones on the journey. If they’re forgettable then that doesn’t actually help your protagonists journeys at all. In fact, it makes their journey a bit pointless.

And hey, let’s talk about the obtainium. This film features yet another Tessaract, I mean Aether — no, no, it was the Infinity Stone. Yeah, that’s it.

Really? Come on, guys! We can do better than this. Give us real plot to go along with our character development, please.

Reilly Close, But Missed the Mark

John C. Reilly and Glenn Close are both tallented actors and they feel completely wasted on this film. They had very little to do and the script for their characters was weak. I don’t know why they were there or cast with such great actors. Not every character has to mean as much as every other character but I feel a little like I missed out on something with these actors.

Speaking of missing the mark, did you know that you cannot survive in space and/or vacuum for more than a few seconds at most? Unfortunately, this film would have us believe that not only can Gamora survive vacuum for several minutes in space — which might have been explained by the fact that she’s a super powered alien — but so can a normal, regular human male.

I’m pretty sure the answer is “I am Groot”

Regardless of anything else that can be said about this film, it’s a lot of fun, it has great character development, and it’s one you should see. On the grand scale of Marvel films, it’s no Avengers or Captain America but it fits into the family nicely.