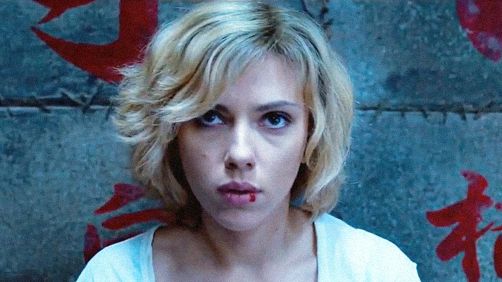 Scarlett Johansson is arguably the most popular woman alive. Morgan Freeman is one of the most popular men, thanks to his mature masculine voice. These two performers gave Lucy the promise of offering a compelling sci-fi action flick that had nothing to do with super-heroes, a reboot, or a franchise continuation. That’s why TJ and I at MovieByte wanted to see Lucy: a movie that dreams big but crashes even bigger.

The woman in over her head

Lucy (played by Scarlett Johansson) is your average American living and studying in downtown Taipei, Taiwan. One not-so average day, she’s tricked into working as a drug mule by her new boyfriend, whose employer is a Korean mob boss and drug lord named Mr. Jang (played by Min-sik Choi).

The drug cartel indentures Lucy and others to smuggle synthetic CPH4 drugs that are sewn into their intestines in plastic pouches. But unluckily, Lucy gets kicked in the abdomen by one of Mr. Jang’s thugs, which causes the bag to erupt and flood her blood stream with CPH4’s blue powder.

The drug is known to be unstable and cause sudden death. But Lucy’s experience is very, very different. She begins a strangely wonderful and frightening transformation, as her mental capacity climbs from the mere 10 percent of most average humans to a grand 100 percent over the course of the film. With her mind powers come other abilities: like telekinesis and telepathy. (Apparently, everyone could do what Lucy does if they just had the wits for them.)

Lucy takes it upon herself to use her ever-growing superpowers to save Mr. Jang’s other victims, turn the drugs over to the authorities, and pass on her new-found brilliance to Professor Norman (played by Morgan Freeman). He is perhaps the only man on earth that could save Lucy before her body overloads and destroys itself from the side effects of CPH4.

Off to an entertaining start

Director Luc Besson’s film tries very hard to establish its credibility in act one. The film starts with a lengthy sequence that takes Lucy from ‘safe’ to ‘sorry she ever lived.’ In this very intense sequence, Mr. Jang and his band of wicked drug dealers had me on the edge of my seat, wondering what on earth would become of the pitiful person that was Lucy.

Scarlett is more than good looks. She’s convincing as the not so bright sheep fallen victim to wolves (or, to borrow from the visual metaphor we see in the movie, the antelope fallen prey leopards). You feel bad for Lucy; this woman that is clearly tricked into one of the worst imaginable scenarios. The villains will almost certainly kill her in a horrific death.

Backing up Scarlett’s performance is Morgan Freeman. His experience and understanding of human nature make him convincing in most any role. And with a voice like his, he is all the more impressive as his character, Professor Norman. This intellectual character is in the first half of the film delivering philosophical commentary that explains (from a not-so scientific perspective) what it might be like if mankind could evolve to the point that we make use of our brain’s full capacity. On the surface of this sci-fi element, it sounds like good material.

But that’s where my praise for Lucy ends. The film has its quirks that show up even in act one; just foreshadowing the ridiculousness yet to come in act two and beyond.

She’s dying. No, wait, she turning into a god.

The CPH4 drugs have killed several test subjects that are victims of this Korean drug cartel. This is established at the beginning, when Lucy sees a pile of bloodied bodies in Jang’s hotel room.

Lucy, carrying a large amount of the drug in her abdomen, is stuck in the worst position to be in when the bag bursts and floods her system with the blue powder. Naturally, you would expect her to die almost immediately. Instead, she evolves in a matter of minutes. This is incredibly convenient — as convenient as it was inconvenient to the fact that Lucy got herself into this absurd predicament in the first place. The woman with the worse luck ends up having the best luck, thanks to experimental drugs.

She takes on telekinetic and telepathic powers almost immediately. Lucy can speed read as fast as The Flash. She thinks like a computer — sees wireless data streams in mid air and reads them with ease by zooming in on them with a pinch-out of her fingers.

The preposterousness of Lucy’s special abilities kills the competition with the villains, as for the whole of act two to the end, she can thwart anything with a hand gesture. As though she’s unlocking her smartphone, Lucy controls anything using her advanced intellect. With abundant knowledge comes unity with nature, technology, and time itself.

Lucy basically has the power of The Force a la Star Wars. But with her mind.

And with all the special knowledge and brain power Lucy gains, she doesn’t think to use any of it to make the world a better place until she’s given off-the-cuff advice from Professor Norman. Not too bright for someone with Lucy’s advanced IQ. This is bad for the story’s sensibility.

With all the knowledge she possesses, none of it sparks new revelations that will better the world as we know it. Lucy only confirms what the scientific community and philosophers of our day think they already know to be true. This too communicated to me that the screenwriters had bit off more than they could chew, because they had an all-knowing character that ultimately didn’t know more about the world than Wikipedia.

And the idea that we use a fraction of our brain’s capacity has been disproved by multiple scientific sources. So the premise is truly fanciful — not a rich sci-fi. The concept is based on faulty scientific theories, and hense it negates the foundation of Lucy.

Worse things could be said of this film. The action is all-too familiar, as though they used The Bourne Identity for storyboards; copying the car chase almost beat-for-beat with Lucy inserted.

And Lucy is no action hero, since she uses her Jedi-like abilities to do most things. She checkmates the drug dealers with one move in every attempt they make to kill her.

The worst grievance of all is Lucy’s turn from fragile woman to emotionally distant goddess. With all her higher brain function changing her thoughts and knowledge base continually, Lucy becomes less and less of a human and more of an automaton.

Scarlett’s expressionless face tells us that Lucy has overcome emotion, like its an unnecessary shortcoming of the human condition. This is a wall that separates the viewer from Lucy, leaving me feeling like Lucy was no better for her new powers. I liked the Lucy that was dumb, like the rest of us are in our current condition.

The over-the-top grand finale borrows from The Matrix, The Tree of Life, and… who knows what else. That’s more of the film’s problems compounded. In the end, Lucy becomes ‘one’ with technology and nature, but she lost her person-hood to get there.

All thanks to a drug overdose.

It’s as though very unscientific and average filmmakers tried to make a movie about extraordinary, intellectual transcendence. They were doomed before they started writing the script.

Lucy is far-fetched, choppy, does a poor job of action sequences, and doesn’t live up to Scarlett Johansson’s and Morgan Freeman’s potential.

I give Lucy ★½☆☆☆ because its bad to the point of sadness, but I think that watching this movie once was a tolerable bit of amusement on a slow day. I plan to avoid the film in the future.

If you have seen Lucy, do you think that Scarlett and Morgan were wasted? Was there any hope for this film, or was it doomed by a premise that cannot be well executed? Share your thoughts in a comment.