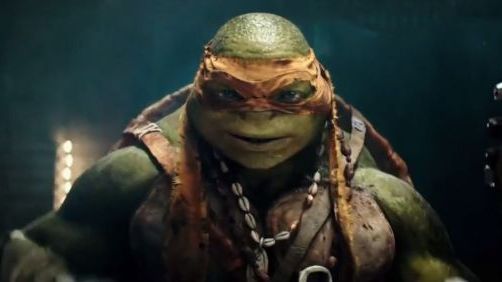 I expected to hate this film. And to be fair, I had every reason to believe I would — not at all the least of which is Michael Bay’s involvement as producer. Then there’s the fact that this is a movie reboot of a franchise that has never been successful in live-action film format and has pretty much been run into the ground. It’s seen several incarnations as a cartoon and is currently being run on Nickelodeon as a terrible 3D hack job.

Now for the weird part: I did not hate this film. I actually thought this film was “just fine”. I looked for reasons to hate it, but there just aren’t any. This film is taking a lot of guff from critics because Michael Bay is involved, or maybe it’s just perceived as a cash grab. But I don’t agree with that perspective.

Heroes in a Half Shell

I was five years old when the Ninja Turtles came to my Saturday morning cartoons. I never really got into it. I had one or two friends who were really into the Turtles, but I just wasn’t. Oh I watched them occasionally, and I played the Nintendo game featureing the afore mentioned Turtles a lot. But I can’t tell you much about our four heroes, their personalities, their adventures, or pretty much any other details save for some of the famous catch phrases like, “cowabunga”, and the fact that they love Pizza.

We are currently in the midst a major super-hero phenomenon fueled mainly by the Marvel Cinematic Universe. The Turtles are technically comic book super-heroes since that’s where they got their start in 1984 so it’s not surprising that some pencil pushers saw the need to capitalize on this. But is there anything there to work with?

The answer turns out to be yes. In my opinion, these comic book heroes in a half shell delivered the goods when it came to entertainment and fun. Though the film alters the details of their origins, alters turtle personalities, and changes many other things, the heart and soul of the Turtles are still in tact from what I can tell. These green guys are still immature, fun, funny, wisecracking weirdos. And, oh yeah, they do love pizza.

This film does not really deviate from any of the ground previous tread by our masked vigilantes, but that’s not necessarily a bad thing. It’s not a difficult plot to follow and it’s pretty crazy. But that’s sort of Shredder’s thing: coming up with ridiculous plots to do evil things in crazy ways. And it’s the Turtles’ job to stop him. That’s basically what we get in this film. Oh Shredder’s armor has gotten quite an upgrade, but it’s basically the same story.

As ever, though, it’s not always the destination that matters, but how we get there. Shredder actually plays a key, but relatively minor part in the film. This film spends much more time with our team. They’re learning how to be the Ninja Turtles we grew up with, they’re learning about each other, and they’re getting to know April O’Neil.

It’s a perfectly serviceable story with a good ride on the way. As with anything Michael Bay gets within 10 miles of, lots of stuff goes boom, but that’s to be expected. I was actually sort of surprised by how coherent some (but not all) of the action is.

Believe it or not, this film is really April O’Neil’s story. That may sound like a problem for two reasons but it’s not really. The first reason it tends to sound like a problem is that you would think this story is about the Turtles and not April. But grounding the story with a primary human protagonist works well in the film’s favor. It’s hard to identify with mutated animals with whom we have nothing in common. I’m not saying it can’t be done. One need look no further than Planet of the Apes to understand that you can easily identify with non-human characters when it’s done right. But sometimes it’s ill advised. I think making April the primary character in this film was the right call.

The second reason one might think making April the prime character is because she’s played by Megan Fox. Trust me, I’m right there with you. Typically, Fox is cast for one reason, and one reason only: sex appeal. I’m sure that still plays a factor but believe it or not I don’t remember any scenes or clothing that put Megan in that role. What was even more surprising to me is that she showed a modicum of acting talent. I can’t tell if this is new or if by not putting her up on the sex symbol pedestal that perhaps some acting talent does actually bubble to the surface. Whatever the reason, I did not hate the film because of her — which is a first for me.

Our turtles were a mo-cap/CGI affair. But that’s par for the course these days. And they were pretty well realized. We are coming to the place where CGI gets less and less in the way of the story. I was never taken out of the story by the CGI, and most of the time, my mind fully bought that these were real mutant turtles in a real world. The only exception to that would be when they were a bit overly exaggerated gangly kids with strange dance moves in a particular flash back. I do wish that the turtles other than Michelangelo had acted a bit more like Teenagers, but they were pretty good.

I enjoyed the ninja rat as a character, and I thought he looked great. The artists did a great job re-conceptualizing the character. However his backstory has been altered in such a way that it’s not very good. Originally, Splinter was a man mutated into rat. Now he’s a rat mutated into a giant ninja rat. The only reason he’s the sensei is because he mutated faster and picked up a book and learned how to be a ninja. Lame.

Since I’m not all that familiar with the cartoon from my youth, I didn’t remember Vernon Fenwick, but he is indeed in the cartoons. I have no way to compare him to the original character, but I liked his character here. Of course being played by Will Arnett is a plus. He obviously has the hots for April O’Neil, but she’s oblivious to all except whatever the big story is that’s going down.

These are two separate characters, but for all intents and purposes, they can more or less be lumped together. Sacks is the brain, Shredder is the brawn. I actually quite enjoyed the fairly cartoonish portray of the villains here. At one point, Shredders tells his goons to use and kill innocent people as bait. In the real world, no one thinks of themselves and the bad guy, and no one would say, “use innocents for our evil dastardly plan.” That’s a very cartoon thing to do and that’s what Shredder did and I loved it.

A couple of things did annoy me about this film.

I have the same problem with the overly complicated fate storyline that I had with it when Marc Webb used it in the rebooted (and terrible) Spider-Man franchise. It takes away from the fun when you overly complicate the fate storyline. Originally, April O’Neil had nothing to do with the Turtles until she met them one night when they saved her from some villains. Originally, the turtles were just turtles that got goo all over themselves and that goo was a mutagen. But that’s not good enough for the box office blockbusters. No, in this film April had the turtles as pets. Turns out her father is responsible for creating the mutagen. The man her father worked for was Eric Sacks who is a student of Shredder.

You see what I mean about over-thinking and over-complicating it. It’s not enough that it could have been any turtles and April could have been any girl. They have to construct a crazy story where everything is intertwined for the sake of being intertwined and I’ve just had enough of it. I prefer J.K. Rowling’s approach with Harry Potter. There was nothing particularly special about Harry. Indeed, the prophecy could have referred to another (I won’t reveal who because , SPOILERS, DUH). Circumstances made it Harry. And it works far better than forcing things.

Then Suddenly There Were Pipes

While in some ways I enjoyed the sheer fun that was being had on the slippery snow slide down the mountain, that sequence seemed to go on forever. Aside from that there was no sense of geography or even physics. That great big semi-truck behaved as if it were a model toy. There was no sense of weight to it. And I want to know where exactly they were at. That sequence when on for 15 minutes. Just how long can you slide down a mountain at 80 to 100 MPH?

And then, suddenly, seconds after that sequence ends, they’re just cruising through the sewer pipes in New York City. How? Poorly done, bad scripting, and bad choreography. What I want to know is how something gets so poorly done with the kind of budget this film had?

Seriously what was Whoopi doing in this film? What was the point? I thought that there must surely be more to the role — that some how the part she was playing was going to come back around and be important later. But it never happened. It seems they spent some time developing her character, so what happened? I don’t get it.

There were other things to like, but not enough to write an entire section on, so here they are.

This Ninja Turtles film is not really for kids, it’s for those of us who grew up in an era where they were popular. That’s not to say kids won’t enjoy it. There were quite a few kids in the theater when I went to see it and they all loved it. But I think the adults enjoyed it as much or more because it’s a part of their childhood brought back to life and re-imagined. Despite the fact that I only give this film three stars, I think you’ll probably enjoy watching it. So go ahead and grab some pop-corn and go enjoy yourself.