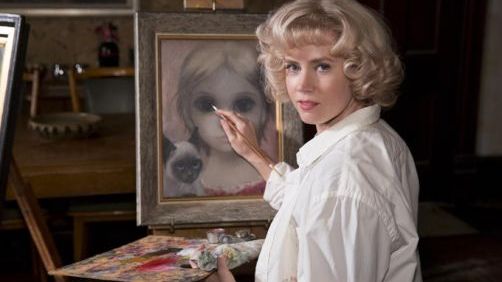 I like Amy Adams in anything I have seen her in. Yes, yes, Man of Steel was a terrible movie that I hope with all my heart I never have to watch again, but Amy Adams was good in it.

Christoph Waltz I have actually only seen in two films, but I thought he was good in both.

On that basis, I am interested in this film. I’m not much of an art watcher, but this film does look interesting. It takes place in the 1950s and 60s when sexism was in some ways at an all time high even though at the same time, feminism was on the rise in a serious way.

Amy Adams plays Margaret Keane who was apparently known for her oil paintings which feature extremely large eyes. Her husband, once they were married, began marketing and selling the painting as his own because the world didn’t want to buy woman paintings apparently. This caused no small amount of angst and a breakdown of their marriage and relationship (what else would expect from a relationship built on such a house of cards?).

Here is the official synopsis:

Directed and produced by Tim Burton, BIG EYES is based on the true story of Walter Keane (Christoph Waltz), who was one of the most successful painters of the 1950s and early 1960s. The artist earned staggering notoriety by revolutionizing the commercialization and accessibility of popular art with his enigmatic paintings of waifs with big eyes. The truth would eventually be discovered though: Keane’s art was actually not created by him at all, but by his wife, Margaret (Amy Adams). The Keanes, it seemed, had been living a lie that had grown to gigantic proportions. BIG EYES centers on Margaret’s awakening as an artist, the phenomenal success of her paintings, and her tumultuous relationship with her husband, who was catapulted to international fame while taking credit for her work.

The film opens on Christmas day. Here is the trailer: