The Act of Killing — Review 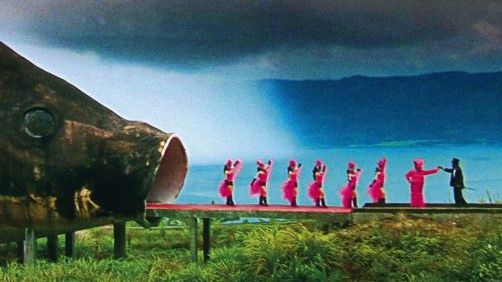 “It is forbidden to murder. Therefore all murderers are punished, unless they kill in large numbers, and to the sound of trumpets.” — Voltaire

Few people are aware that Indonesia saw one of the greatest genocides of the 1960s, in which between 500,000 and 1,000,000 (an Indonesian official has pegged the number at 2.5 million) supposed communists were slaughtered by a right wing military dictatorship. Here are a few facts I found out about it: When reports of the genocide arrived in the US in the sixties, it was seen as triumph for democracy, a proof that the so called domino effect — the idea that if communism could take hold of a single nation in the continent, others would follow — could be contained. Indeed, the US government may even have taken a part in planning and enabling the genocide. The killings took a year to complete, carried out by paramilitaries and gangsters. The murderers have suffered neither the punishment of their own government nor even the scorn of an oblivious international community, and indeed, are honored, powerful national figures to this day.

Audiences will find it necessary to research for themselves in order to discover the facts above. In The Act of Killing, Texan documentarist Joshua Oppenheimer does not seek to provide a historical overview of the massacre and its aftermath. Rather, he uses his startlingly innovative and even twisted methods to jar us into awareness, to bring us into the depths of humanity’s propensity for evil, and even to subtly suggest that we ourselves are the participants in the same wickedness.

Oppenheimer wisely begins his film by introducing us to his methods before his subject. Self reflexivity is not a familiar concept to most audiences, and such a genre blurring instance of it is unlike anything I have encountered. We are shown a series of sublime, almost psychedelic images, yet playing over them is the intrusive voice directing the actors and cameramen. We are being oriented to one of the outstanding innovations of the film, which is the way it blurs the barriers between film and documentary, between truth and fiction, and between imagination and memory.

In due course we are introduced to Anwar Congo, a national hero, a prosperous, amiable old man, and a gangster who personally slaughtered a thousand people, by his own estimation. He is by no means the most prolific killer we meet. Oppenheimer and the filmmakers convinced Congo and other criminals not only to participate in making a film about their own pasts, but in the even stranger task of creating documentary about a film about themselves. The film weaves a disturbing path through each step of these recreations, from conceptualization and design to choosing actors and shooting. They are often horribly graphic, as in the memorable instance of a beheaded prosthetic having his liver eaten. In the intervals, we see their personal conversations and reminisces, in which they regard their pasts with a mixture of chilly removal and pride, though Anwar and his associates worry most about how they are costumed, wanting to imitate the characters from the gangster films they loved as young men.

Indeed, the connection between movie violence and the imagination of mass killers plays an important thematic supporting role. In it, we are induced to see in our own fetishes for stylishly violent fiction what a disturbing similitude we share with the vile sadists we see onscreen. This reminds me of a story my father told me about a friend who was murdered by a pair of Natural Born Killers crazed youth. I do not think Oppenheimer is accusing us of anything; Anwar often watched Elvis comedies to keep his heart light, but no one would suggest these films are complicit in mass murder. What is being explored is what feeds the depraved imagination.

Anwar tells of the method he invented for efficient murder, a quick strangulation using a stick and a piano wire. In one of the many extreme scenes, he plays the role of victim while others torture and strangle him. Though Anwar himself is visibly disturbed by this recreation — he even weeps — we are told that his colleagues thought he should be more sadistic. One speaks of a shocking number of techniques he devised; another speaks of his taste for raping fourteen year old girls. Anwar, though not by any means contrite, yet admits to nightmares and visitations by ghosts. Others are more brazen, declaring openly that they were deliberate in cultivating thought patterns that excused them of their crimes, even boasting of them. They say that God was on their side because he hates communists, though it is difficult to imagine a government more corrupt and degenerate than the one these men built in the blood of their victims.

Oppenheimer himself is never on screen, and only seldom makes his presence known, through interrogative, unavoidably hostile interview questions. In the end, he leads Anwar to retrace his steps, back to the very room in which he slaughtered so many people. In a film full of violent and shocking imagery, full of feverish crosses between documentary and fiction; in a film where we follow the camera into the very abyss of human depravity, into the imaginations of perhaps some of the most debased men living; here is an ending which draws it’s power purely from the disturbed facial expression, the vomiting, the sudden hesitancy of a man who is shaken to his core by the full weight of memories he has so long suppressed. “Have I sinned?” He asks. “I did this to so many people.”

There is a looming, barely acknowledged presence in the film, full of the weight of grief and unmitigated pain, vaguely ominous and threatening. It is the surviving relatives and children of the victims, who must number in the millions. Oppenheimer’s follow up to The Act of Killing, entitled The Look of Silence, which is only now beginning a run on the festival circuit, explores the confrontations between these killers and the people whose lives were ruined forever by their crimes. Will Anwar be able to continue to keep up a boastful face, I wonder?