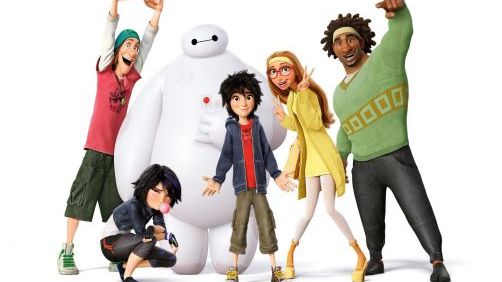 You guys remember Wreck-it Ralph? It was a film by Disney Animation Studios in 2012, and in many ways very much in the same line of work as the latest offering from Disney, Big Hero 6. I don’t mean that in terms of plot it is similar — indeed, it is very dissimilar in that way. What I do mean is that this is the new Walt Disney Animation Studios. I think we got a little hint of this with Bolt (2008), which was a surprisingly good film for what it was. Not on the same level as the latest three offerings from Disney by any stretch of the imagination, but quite good, in my estimation.

The Princess and the Frog (2009) was an unfortunate film directly following Bolt, with Tangled (2010) representing a mid way point between their current and well made offerings, and the afore mentioned Princess and the Frog. Winnie the Pooh just sort of is, there in 2011.

But now, we have three really good films in a row: Wreck-it Ralph, Frozen (2013), and of course, now, Big Hero 6. I think that maybe we can start ruling out coincidence. I think it has taken a while for the magic to take effect, but I believe the success we are seeing now is a direct result of the creative vision and influence of John Lasseter.

Coming back to what I said about its resemblance to Wreck-it Ralph: this film has charisma, story, heart, creative vision, and lovable characters — just like Wreck-it does. Where it differs majorly is, of course, the plot. Big Hero 6 is a Marvel property. As Disney owns Marvel, this simply did not pose a challenge.

One of the most important aspects of this film, I think, is its world building. The film is set in the make-believe city of San Fransokyo. This ends up being a mash up (as one might expect) of San Francisco in terms of geography, and Tokyo in terms of architecture, with Blade Runner like ships flying around in the sky.

In this make-believe city in the make-believe future, robot fighting is a thing, and not only that, but it’s apparently an illegal thing — I’m not exactly sure why, though. Our primary hero, Hiro, is a wiz kid who graduated high school at the age of thirteen and is a technological wonder boy, but he seems to lack motivation. So he passes the time robot fighting with his un-assuming robot, looking like he doesn’t know what he’s doing, and kicking all the other robot’s metal butts. This seems to land him in some trouble.

Another aspect of the world building I found refreshing was the lack of need to display everything realistically. It is a 3D computer animated film, but in keeping with John Lasseter’s vision way back with the first Toy Story, there is a sense of realism that would dip down into the uncanny valley when carried too far with 3D animation. So his idea has always been to reign that in. Just because a thing can be done doesn’t mean a thing should be done. There is a time and place for the most realistic CGI possible (sci-fi film effects, ships, worlds, etc.), but it does not belong in an animated cartoon — at least for the present time. So despite the world feeling very real and relatable in some ways, in other ways, it stays well far away from that strange place of almost-but-not-quite realness.

Take the lovable and huggable Baymax for instance. He’s a big squeezable cushion full of air, all ovals, angles, and curves — and completely unable to exist in a real space in real life. Despite the 3D-ness, and perfectness of his animation and style, he feels very much like a throw back to older-style hand drawn animation. His shapes bend and contort onto the screen in ways that only a cartoon character could, and that’s perfectly okay.

On the other hand you’ve got Hiro — a gangly teenager so skinny, he also couldn’t exist in real life. Like many things in cartoons, he’s a complete exaggeration of how we think of pubescent boys, all legs and arms and awkwardness.

Later, when our team of six forms, their powers and their costumes are pretty ludicrous and outlandish as well. But it all serves the film quite well. In a way, it sort of reminds us how ridiculous all this stuff really is that the comic book films throw at us. But this film says, “You know what? Just sit back, have fun, enjoy the ride, and get involved in the story.”

This film is not all cuddles and fun. In fact, the first act of the film really brings us to a very low point with the death of Hiro’s brother, Tadashi. Where the film gets even darker is with the reveal of what he died for. We see in the first act that Tadashi died heroically, headed back into a burning building to save his professor, Robert Callaghan, at “nerd school.” While inside, there was an explosion that killed him — and presumably the professor as well. As we discover, the professor is not dead, the fire and explosion were actually caused by him, and it was all a plot to get his hands on Hiro’s miniature bots.

What’s more, it turns out that this Callaghan is out for blood because of perceived wrongs by another scientist, Alistair Krei, who he believes is responsible for the death of his daughter. There was a wormhole experiment, Krei ignored certain warning signs to impress his government sponsors, and it resulted in a loss of magnetic containment (Treknobabble in a Marvel/Disney cartoon? Oh yes!) and the wormhole generators were shut down while his daughter, Abigail, was still inside. With Hiro’s little bots, he intends to exact revenge.

Where Big Hero 6 really shines is the thematic elements it brings to the table. I think this is again where we see John Lasseter’s influence over Disney Animation Studios most strongly. Think about the films he has either directed or overseen. They had strong thematic elements in the same vein. The Toy Story series is applicable again here in the themes it tackled. Yes, like Big Hero 6, all three of those films were ostensibly children’s films. And yet the themes were big, grown up themes. Love, sacrifice, forgiveness, selflessness, character growth, everything that goes into good filmmaking is present both in that series, as well as this film. The themes this film tackles are what makes it such a strong film. It offsets the comic humor, some of the goofiness, the intentionally cartoonish animation, and more, by connecting with us on a deeply emotional level. Like the best of those Pixar films, the characters have a way of becoming quite real and meaningful to us. We feel their losses keenly, we grieve and weep with them (as usual, I may have had wet eyes a time or two), we identify with them in friendship and in hurt. We desire the revenge our characters desire, and we grow with them. This is the strength of this film. And this is sometimes where we can feel uncomfortable.

We identify so much with Hiro when he remove’s Baymax inhibited programing to keep him from harming another human, and orders him to kill Tadashi’s killer. And that makes us uncomfortable with ourselves and our flawed hero. He’s blinded by grief and rage and desires nothing more than revenge. But as we have all learned — or should have — vengeance is not something we should take personally on others. And it’s something Hiro must learn.

I enjoyed this film immensely. It has all those qualities that draw me to cinema — good story telling, great characters and character development, a great script, a sense of its place in the world, fantastical world building and escapism, and just the right balance of action and heroism mixed with principles and life lessons. If you haven’t yet seen this film, please do so. It may not rise up to the brilliance and wonderfulness of Pixar’s Incredibles, but I’ll be doggone if it doesn’t get pretty close.