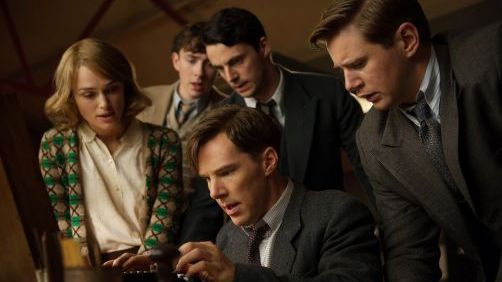 I wonder what the process of casting for the part of the irascible “father of modern computing” looked like? I have to say I have no idea, but whatever process lead them to casting Benedict Cumberbatch was the right one! This film rises or falls on this one performance — even though there were several good performances in the film — and as always and ever, Cumberbatch elevates this film to a level I do not think would have been possible with any other actor.

There are many uncomfortable details about the work and life of Alan Turing’s life that the film does not shy away from.

By all accounts, Turing was an odd fellow with no sense of propriety in public. In this the movie is correct (though some of the details the film takes liberties with). It stands to reason that a great mathematician and computer scientist able to accomplish such things as Turing did would not be and think like many of us.

There’s also the matter, of course, that Turing was a homosexual at a time when private homosexual acts between two consenting adults was illegal in the United Kingdom and you were not treated well if you had leanings toward homosexuality. This would obviously have the effect of making the man eccentric and emotionally withdrawn. The film depicts an event in Turing’s childhood where a dear male friend for whom he had developed romantic feelings for died and left him scarred and alone and deeply hurt.

Though his romantic tendencies leaned toward men, he developed a deep friendship with Joan Clarke — at least in the film he did. He had gone to bat for her to be on the team with her parents and spent much time with her. Though I at least am unclear on the real life details of all that, he did in real life know her well enough to propose marriage to her. As in real life, in the film, their engagement is cut of by Turing who, as a homosexual, cannot go through with it. The movie depicts that Joan was unfazed by the revelation of his homosexuality, and that is reportedly the case.

Several years after the events for which Turing is known during World War II, Turing was tried and convicted of indecency for conducting a homosexual relationship with a 19 year old boy. The film depicts this a little differently than it actually happened — indicating that the boy had been hired when in fact, in real life, it appears that it was a consensual relationship. I am unclear what the United Kingdom age of consent would have been at that time. It’s 18 here in the U.S. and I believe that is common. But of course, age of consent did not matter at the time to the British law in a homosexual matter. He was subjected to oestrogen injections (chemical castration) to reduce his libido.

The film goes on to tell us that he died of poisoning not long thereafter and it is believed he committed suicide.

In all this, though it is obvious some liberties are taken and things are over-dramatized (as you would expect), the film and Cumberbatch do a wonderful job with this material. The essence of the man is conveyed and a lot of sympathy is generated for the character, despite his off-putting and unlikable nature.

The primary plot revolves around, of course, the decrypting of messages encrypted by the Enigma Machine. This is the drama the film centers around, and it does a good job of making it all understandable. Where the film introduces tension is in making Turing very sure that his machine to crack Enigma would work, and those working with him being sure that it wouldn’t and that they were all wasting their time while people died. In reality, Turing himself said he wasn’t sure it would work but he needed to try. But you can’t blame the film for introducing drama and tension.

We go through the journey with Turing of learning to create an atmosphere of trust and working together that would be needed later on. It’s something that’s hard for him to do as an introverted, irascable man, and something Joan Clarke helps him with.

I normally do not like non-linear story-telling that much. However, in this film it is done so well that I can forgive it. And not only can I forgive it, but I would have a hard time seeing this story told another way. It’s told in a semi-flashback style, although not conventional, fuzzy flashback. Once the story begins, and once the three time periods are established, you are taken back and forth between them with the utmost skill, but without visual tell tales of what period you are in. The story unfolds to reveal both the flaws and good character traits of Turing, showing us aspects of his school years and interaction with his romantic interest there, and his work on breaking the Enigma encryption. I was never confused or frustrated by the non-linear telling of the story. It all made sense and worked quite well toward the film’s bennefit.

Rewriting History For An Agenda

Unfortunately what holds this film back a little is the way in which the story was changed in a particular area. I was okay with the dramatization and sensationalization of most aspects of the film save for this one.

The film depicts and tells that Turing was investigated for suspicious circumstances when his home was burgled and was found to be having an indecent homosexual relationship. In the film he was then sentenced to estrogen treatment which caused emotional instability and other problems. Ultimately, the film seems to imply that all this led to Turing’s suicide. This all fits with the modern homosexual agenda to tell a story of repression and mistreatment. Unfortunately, I think we need to be very careful with the truth and the drama here. I don’t think on such an important issue it is necessary to change the facts, and the facts are these: Turing was charged with and convicted of indecency due to his homosexual relationship. He was then given the choice of imprisonment or probation and estrogen treatment. He chose the estrogen treatment. All indications are that his emotional state, his relationships, and his work suffered not at all from this. And his suicide came 14 months after the treatments and is not believed to be linked. A few modern scholars even believe that his death was actually an accident. The fact is we don’t know for sure.

Now, I can fully get on board with the fact that this was a horrible and terrible way to deal with this. And I would also say that there is a huge difference between believe that homosexual acts are wrong or sinful, and criminalizing them. I don’t think this is an issue that should have been punished with questionable hormonal and chemical treatments and I think the fact that he was is horrendous. So why change these facts? It was terrible as it was, why the need to change it?

Well Worth the View

Despite that one thing, this film is well worth seeing. It tells the essentials of the story of the father of modern computing — the man who is credited with helping end a dreadful war two years earlier than otherwise by helping to crack the Enigma encryption. The film doesn’t hide some of the more questionable character aspects of the man, and it tells the story in a way that will not leave you bored. The film is quite creative in its use of non-linear story telling, and the way it unfolds the drama.

I thoroughly enjoyed this one and I highly recommend it.