The Language of Spellwork in ‘Harry Potter’ 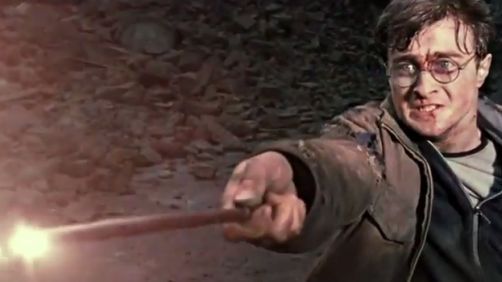 In the essay collection Harry Potter and History, there is an essay titled “Severus Snape and the Standard Book of Spells: Ancient Tongues in the Wizarding World” by M. G. DuPree that points out something you might have missed between your swishes and flicks:

There’s a linguist’s saying about English speakers that we go to work in Latin and come home in Anglo-Saxon. Meaning that much of our professional language (words like office, supervisor, colleague — even computer and telephone) comes from the Latin-derived French. While the language of home (house, hearth, fire) comes to us from the German-derived Anglo-Saxon. To use Latin is to ally yourself with all of these powerful connotations at once: mystery, power, and formalism. Thus, it is interesting to note that the wizarding world falls into the same patterns of speech, with many lower-level hexes and household charms in English, such as Scourgify. It’s in the higher-order spells that one sees the shift to Latin and Latinate phrases: Expecto Patronum, Cave Inimicum, Fidelius, Expelliarmus, Finite Incantatem.

Rarest of all spell languages in the British wizarding world is Greek, which makes surprisingly few appearances. In pure form, there are only two Greek-based spells mentioned in all of the seven books: Anapeo and Episkey. The interesting thing to note is that both of these are spells with medical uses, which should not be surprising: in the ancient world, Greek was the language of physicians.

I have never ceased to be amazed to the depth of Rowling’s writing upon close inspection. I was faintly aware of some of the linguistic roots of some of the spells used, but as with most things in the Harry Potter book series, the depth is pretty incredible. There are also some studies out there about Harry Potter it’s relationship to alchemy that are pretty fascinating.