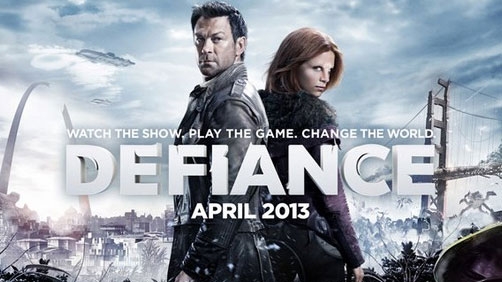 I’m not sure how I missed this. Maybe because it’s on SyFy and I’ve pretty much given them up as a bad job. I mean actual sci-fi on SyFy? Say it isn’t so, I thought they had given that up. But this appears to be sci-fi on SyFy, and it may even be good. We’ll have to see.

I found this synopsis from GeekZenith.com:

The show is set in the near future where Aliens known as the Votans come to Earth seeking refuge after their home star system is destroyed. Naturally, when they arrive they are not welcomed by Humans with open arms. Instead, they orbit Earth for 6 years whilst negotiating with Earth Governments for settlement on our planet, but when supplies on their ships run low, they turn to war out of desperation to try to force the issue.

During the war, Votan ships containing terraforming techonology are shot down and change the planets surface so that it’s dangerous to both Humans and aliens alike.

After decades of fighting, both sides are exhausted by war and a ceasefire was declared, leaving a war torn planet and highly factionalised governments. On both sides, militia’s joined together realising they were stronger together than apart.

The series picks up at this point and revolves around the main character Jeb Nolan who returns to his home town of St Louis to find a refugee camp called “Defiance”. He quickly becomes the camp’s lawman and strives to protect the camp from clashes between humans and aliens, military scavengers and other threats.

The show premieres on Monday, April 15.