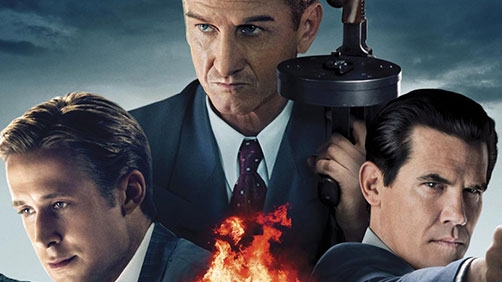 “I’m not an educated man, but I have wits in history. Every kingdom comes of blood, every castle’s built on a pile of bones. When I came out here, L.A. was nothin’. Back east I was a gangster… out here, I’m god.”

Gangster Squad is the best film I’ve seen this year. Of course, the year is young so that’s not saying a lot. Still, it’s a fine film in my book.

There are those who would disagree with me. In fact, as of right now on Rotten Tomatoes, the Tomatometer is at a measly 33%. And only 66% from the audience. That’s not exactly killing it.

Roger Ebert was not overly fond of the film either. The usual case for me and Ebert is I either mostly agree or mostly disagree with him, leaving little room for anything else, and this is no exception. I really don’t agree with him.

So while the cast has a field day, Fleischer seems content to equate flashiness with quality, employing such visual tricks as variable slow-motion when bullets and bodies are flying, and digital wizardry designed to give explosions and other pyrotechnics a dynamic, almost three-dimensional life of their own. And while the ultra-slow-mo image of a Christmas tree ornament shattering in a hail of bullets may look pretty cool for a few seconds, it’s merely a brief distraction from the shortcomings of Will Beall’s screenplay, adapted (loosely, we can assume) from the book of the same title by Paul Leiberman.

What is at the root of all this angst and low ratings? I have a theory or two. The foremost theory is that a film this violent and bloody is just too close to the Sandy Hook shooting last month for many people — especially critics — to be comfortable, despite what they actually say the reasons for dissing the film are. It may even be subconscious.

As the film opens, we’re treated to the type of violence we might expect from this film. The camera reveals that a man is chained to the bumper of two cars facing opposite of each other, engines running. Mickey Cohen is telling him the way things are in “my town”. The cars “let her rip,” and you can imagine what becomes of the man.

And though perhaps the grossest thing in the film, this is indeed the type of violence you may expect from the rest of the film.

I liked the film a lot more than I disliked it. And one of the major reasons was for the casting and performances. Sean Penn’s Mickey Cohen is delightfully wicked. You really feel the part and understand the need for him to be taken down. He’s a tough cookie. He really lives the part.

Ryan Gosling really brought home the bacon as well playing the boozing and womanizing Sgt. Jerry Wooters. He does a good job of convincing us that he will not be taking any part in the dangerous operation of taking Mickey down. But as it turns out, he does have a heart when a kid he was sort of fond of gets killed by a stray bullet meant for someone else.

And of course there’s Emma Stone as Grace Faraday. Emma seems to be making her way around lately and it’s no surprise why given her acting abilities portrayed here. She went from teenaged geek girl in The Amazing Spider-man to one of Mickey’s “pro skirts” as one of Mickey’s guys refers to her, and believable so. The Emma Stone from Spider-man is not present here at all.

Oh right, there’s Josh Brolin. That I am listing him fourth is not because I want to do him a disservice. It’s just that it’s hard to know where to place who given the talent present in this film. His Sgt. John O’Mara comes out quite well. Loyal, and ultimately conflicted and torn between cleaning up the city and doing right there — waging a war for the heart of Los Angeles — and doing what is right for his pregnant wife and family.

There are other somewhat notable performances in this film as well. Short and sweet is Jon Polito. He’s got the gangster look and the characterization works well. It’s too bad he didn’t get to spend more time on the screen, but Mickey is the star gangster here.

The only other character I’ll mention is Max Kennard played by Robert Patrick. Even though his character was somewhat one-dimensional, he was good for a laugh.

All in all I thought the performances where first class and were the shining light in this film. Though perhaps some of the story was a bit over the top at times, these actors managed to redeem it.

The cinematography was good, but in addition to the cinematography we got a good looking depiction of the 1940s. Sure it’s highly stylized, but there’s nothing wrong with that in my book. There’s something very cool about seeing those old cars in action, and hearing the weird sounding phrases, and even the different way of looking at and thinking about the world.

And when’s the last time you saw some 14ish year old boy trying to shine folks’ shoes. I don’t know that I’ve ever seen that in my lifetime. Am I the only one?

Oh, and everyone smoked those nasty cigarettes. That’s just the way the world was then. It’s weird how that is so out of favor now. I don’t know anyone who chain smokes that isn’t apologetic about it — not anymore. Funny how things change.

One of the things that really surprised me was the way the story unfolded around O’Mara’s wife and unborn baby. I thought for sure they were going to make it very personal by having Mickey/Cronies kill her. And my worst suspicions appeared to be confirmed in the last moments of the second act as she appears to fall to the floor bloody, bullets whizzing all around her.

But as it turns out, she gave birth to their son in the bathroom and she’s going to be alright. This was a pleasant surprise to me. Since the film is based on a true story, I suppose this is the way it really did work out, but not being familiar with the true story I have no idea.

On the other hand from my praise of the performances, I do have some critiques. One has to do with a great performance. While the film would not have worked at all without Mickey Cohen’s dark and villainous role to contrast against the completely straight laced Sgt. O’Mara, yet I really wanted more of Sean Penn in this role. More would have been much better. I wanted to see his anger kindled and really go after it. It felt like he was a bit wasted as it was.

In the same vein, I felt like Grace Faraday’s part in the plot really turned out to be just a bit part, which is just too bad. We spend a lot of time with Jerry Wooters, but we don’t find out why he feels such loyalty for Grace, or what is really driving him other than the death of the kid he thought fondly of.

We do get a lot of what makes O’Mara tick, but it’s pretty one dimensional. Instead of character development, we’re treated to a 1940s car chases. Exciting! (he said in a sarcastic tone). And of course the standard fare whiz bang and tommy guns.

I have mixed feelings about the end. Sure it was somewhat poetic for the boxing champ, Mickey Cohen, to have been beaten and lost everything, and then finally to loose at his very own sport to an inexperience boxer, O’Mara. But it doesn’t make a lot of sense. He should have eaten O’Mara’s lunch.

And shouldn’t O’Mara have gotten in trouble for brutalizing the guy when he was just to arrest him?

Which leads to larger point of mine…

In this film, the good guys are operating outside of the law. In general this is never a good message to send in my opinion. The guy needed to be stopped for sure, he was a criminal, but being a criminal to combat a criminal is a warped view of the world. Two wrongs never make a right.

You can easily see that something had to be done. But I don’t know that everything they did was justified. It’s just a note, and it’s a small one, but it’s something I personally like to be aware of.

I think it’s worth seeing. It has great acting and performances, and a pretty good story.