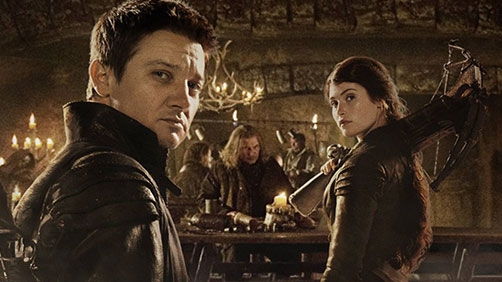 While this story is squarely placed in the magical world of fantasy, it bears little resemblance to recent, highly rated fantasy films such as popular Marvel titles Thor, Captain America, The Avengers and the like. Or perhaps a more apt comparison would be to another fairytale derived film, Snow White and the Huntsman, to which this film also bears little resemblance.

But that’s not to say that Hansel and Gretel is not any fun, or good on any level. I was not quite sure what to expect when I went into the theater. I’ve been anticipating the film, knowing that there was potential to be had here. But I’ve also known that it could go either way — lots of potential for things to go horribly wrong. Consider for instance that this film was produced by Will Ferrell’s production company (huh? you say. And yeah, that pretty much echoes my thoughts on discovering that bit of information). Thankfully, they didn’t go horribly wrong and the film was a good bit of fun (as Calvin Candie might say). I admit that I like a good story modification such as this one. When done well it’s a huge win. This sort of thing is a slight modification to the original fairy tale, to frame the actual story being told. When done poorly, it induces irritation or even rage. When done well, it becomes interesting in a way that brings new life to an old story. Perhaps it is because I was never really familiar with or fond of the original fairy tale, but I like this story mod quite well for what it was. I mean, after being imprisoned and nearly killed by a witch, what would you do afterward? For Hansel and Gretel, the answer is to become witch hunters.

And so that’s just what they do. After the opening framing story, we’re treated to a montage of clips, newspaper clippings and the like to communicate to us during the opening credits that Hansel and Gretel are hunting down and eliminating witches. And they are doing so in a not nice way.

SPOILER - though not much of a spoiler as I’ll explain.

We learn fairly early in the film that witches don’t have any power over Hansel and Gretel. It’s not hard to figure out why this is, actually it’s quite obvious: Hansel and Gretel have witch blood in them. But in a strange way, that doesn’t really detract from the film. There’s a way to do obvious, and I think Hansel and Gretel did it okay. Don’t make a big deal out of it like it’s a world ending mystery. I think that’s where many films with obvious plots fail is that they trump up the easily seen through mystery as this big thing that the world hinges on. Hansel and Gretel doesn’t make a huge thing out of it. It’s just something that is.

The mystery is in how they will react to this knowledge. And what will they do if they find out there actually are good witches? Our leading roles are filled by Jeremy Renner (The Avengers, Ghost Protocol) and Gemma Arterton (Quantum of Solace, Prince of Persia), and they do an admirable job with a fairly light-weight script. I’ve personally only seen Gemma in Quantum of Solace and though her role in that film was small I thought she seemed like a fine actress. And in this film she certainly shows her acting chops quite well. I expect to see more of her in films to come.

Renner of course is great. Even if a film or two that he’s been in is a bit questionable, I could never lay the blame at his feet. I always lay it on the script or director (or both). He was fantastic in The Avengers for sure, and he does well here. Here too in a leading role we see Famke Janssen, which leads in to a dislike. What is it with casting a well known beauty, and caking her up with ugly makeup? Huh? What’s up with that? Yeah, the premise is that she can make herself look beautiful or whatever, and they do that a couple of times throughout the film, but it’s always seemed somewhat paradoxical to me when a film casts a star for her beauty (presumably), and then uglies that star up for the role. Another great example of this is Michelle Pfeiffer in Stardust where she looks like her natural, beautiful self for approximately all of five minutes in the film. Janssen gets a little more than five minutes of beauty in this film, but not a lot. It’s just a bit strange to me. But beyond that — because lets face it, that’s really not worth dinging the film over — I felt Janssen’s character was under utilized. Where did she come from? What made her world tick, more story please!

Speaking of story that’s really where Hansel and Gretel falls flat. Though the story that is present is good as far as it goes, it was very lean, there’s just not a lot of meat on the bones here. It’s all fairly straight forward with not a lot of originality or thought put into it. I predicted pretty much every story beat that happened. That’s not always a bad thing, but there should be a twist here and there. What is here doesn’t make for a bad experience, but what’s not here makes itself apparent and prevents the film from rising above the crowd and making the experience truly great.

The film is bloody, and violent at times, but it’s also good in a lot of ways and worth watching. It’s fairly entertaining. It’s not really above average, but it’s not below either.