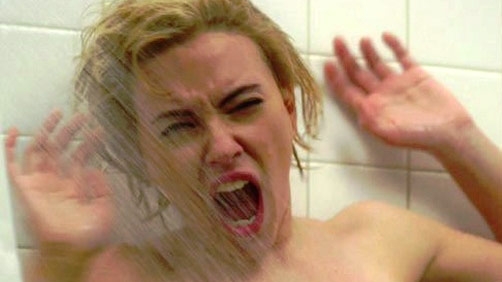 Hitchcock is unique to me because it was the first film in theaters that TJ and I saw together. 1 Hardly what we would’ve picked for the occasion, it surprised us both to be more-or-less an entertaining portrayal of Hitchcock’s life and times during the production of the classic horror film Psycho. Since I know a lot of Hitchcock films by heart, and TJ hadn’t taken the time to watch any besides the original Psycho, this afforded us some great discussion about Alfred Hitchcock from many angles.

It didn’t occur to me until I was watching the story unfold how intriguing the production could be (told from the right director’s vantage point) for an older film, like Psycho. Hitchcock is a story about an old couple reviving their marriage under especially unusual circumstances: being Mr. and Mrs. Hitchcock in the midst of producing the strangest film in Alfred’s filmography up to 1960.

Alfred Hitchcock, played by Anthony Hopkins, breaks the fourth wall as soon as he gets the chance. In the first scene, one ornery farmer kills another. Hitchcock, looking on, shares with the audience that this is a world of peculiar make-believe where the dark intricacies of man’s depraved nature will be explored. Alfred is standing there by the dead farmer, with a familiar looking farmhouse situated in the background. One might think we are in for one of Alfred Hitchcock Presents television show episodes.

But far from an ordinary episode of Alfred’s Hitchcock Presents, the film includes Alfred himself in the fictional narrative — based on true events in 1960. It’s the story of him and his impressive wife, Alma, played by Helen Mirren, producing the film Psycho together. Hitchcock quickly becomes a depiction of the events surrounding their strange marriage: interweaving a backdrop of Hollywood culture, their emotional affairs, dark dreams, and curiously chilling glimpses of murderous thrills. Hitchcock is a romantic creepy drama.

Alfred himself walks a fine line of entertaining himself with the intoxicating thrills of his thrillers and becoming a part of those thrillers. In the effort to return to the exhilaration he experienced directing his early films, he pours his heart and soul into the film adaptation of Psycho, a novel by Robert Bloch. Treating it more like the true story of Ed Gain rather than the fictional one by Bloch, Alfred becomes intimate with the psycho character in his mind — to the point the psycho himself is like the demon on his shoulder giving Alfred devilish advice.

Alma too has scruples to overcome: the toughest of them all being her natural instinct to withdraw from Alfred for his many repulsive shortcomings and pretentious eccentricities. Could anyone have imagined the pain a woman would suffer living with Alfred Hitchcock? Till death they should part?

Psycho is the production of their lives that is destroying their marriage. Alfred’s fantasies about his movie starlets bring out the dark side of his emotional dissonance. This could be the death of the Hitchcocks’ life-long dreams. Hitchcock is refreshing visually. I love period Hollywood stories, visiting the golden and silver years of film production. Hitchcock doesn’t disappoint in the slightest to maintain the 1960 vibe — right down to the clicky-clacky mechanical typewriters and old-fashioned formal dresses.

The meat of Hitchcock is its core cast. Anthony plays Alfred charmingly, with all the subtlety you would hope his ego and twisted nature would unleash. Anthony’s is not a play-for-play depiction of Alfred Hitchcock from real life, or the man we see introducing Alfred Hitchcock Presents. Anthony’s Alfred is one bred for this drama, a fictionalized Alfred Hitchcock that feels appropriately enhanced.

Scarlett Johansson and Jessica Biel surprisingly sell their old-fashioned actress roles within roles. Even Biel looked as though she could act. Scarlett is gorgeous as ever, and made Janet Leigh a pleasantly heart-warming character that brought relief to the somber tones of the film. Their is an air of the actress’s naivety and innocence that contrasts well with the cynicism and emotional baggage of the Hitchcocks.

Another treat of Hitchcock is the witty and unusual soundtrack, brought to us by Danny Elfman. Not over-the-top in his routine fashion, this musical score is a flashback to older soundtracks with enough personality to sell you on the mood it represents from scene to scene.

There is a magical moment when Hitchcock is waiting in the lobby of a theater listening to the audiences first-ever reaction to the Psycho shower scene. Alfred is dramatically acting out the scene for himself while he listens to the honestly terrified screams inside the theater. This scene had TJ and I in stitches, and equally weirded us out by Alfred’s disturbing-ness. The scene is a great depiction of everything there is to like about the film.

Kudos to the makeup artists responsible for Anthony Hopkins’ Alfred face. There are some serious prosthetics on him to give him Alfred’s likeness, but I never saw a hint of the fake applications. Anthony has a rounder head than Alfred did, but otherwise the detail sells the likeness. I expected there to be the typical shortcomings that most all films have with makeup prosthetics, but Hitchcock exposes no such shortcomings.

Whether it was the work of an inexperienced director, or the screenplay that hits subtle moments of the story with too much force, it just felt like many scenes were too “delivered” and not “lived.” Even our talented stars, Anthony, Helen, and Scarlett, were brought down to the weak levels of the “staged” quality. On a good note, this is characteristic somewhat of Hitchcock’s own films. Maybe this is what Sacha Gervasi was intending to mimic, a backwards and shallower quality of acting performances of a bygone era? If you are good with the acting being in keeping with the deliveries in Hitchcock classics, then this issue probably won’t bother you as much as it did for me.

One subplot in particular exposes the pitfalls of the forced delivery. Alma has a secret admirer, Whitfield Cook, played by Danny Huston. In their secretive relationship, and their private conversations that were inducing a borderline emotional affair, I felt the screenplay and direction were weakest. This comes as a great disappointment to Alma’s story arch, and cheapens Helen Mirren’s potential in Hitchcock. Alma’s story is key to Alfred’s, so when it suffers, so does the main plot.

A complaint I notice many others have with this film is the lack of scenes depicting principle photography of Psycho. Apparently, Hitchcock’s production couldn’t get copyright permission to depict many specifics of the original film, so this film avoided them altogether. I don’t think Hitchcock is lacking too greatly without showing more specific events of the Psycho production. That said, I was expecting it. Like a well-prepared appetite anticipating delicious pizza that is instead served gourmet lasagna, I found what was delivered in Hitchcock to differ greatly from my expectations. Seeing Psycho lived out from behind the curtain would have tickled my fancy.

Hitchcock is an entertaining film that doesn’t quite live up to Hitchcock’s own prestigious filmography, like everyone hoped it would. It’s worth seeing and singing the praises of Anthony Hopkins, but it’s nothing to go crazy over. I figure I will see it once more when it is available for home entertainment and that will be that.