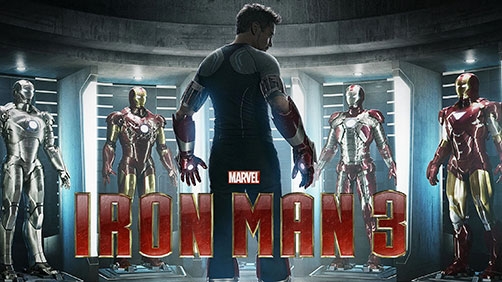 “So much of the journey of ‘Iron Man 3’ is informed by Tony’s experiences in ‘The Avengers,’” Feige told MTV. “It’s almost like post-traumatic stress: he really has retreated after the events of ‘The Avengers’ into his workshop, where he’s building advanced versions of his suits. He has [designed] a version of the suit that can latch onto him in individual pieces ... anytime, anywhere. As he starts to realize, it’s basically because he doesn’t want to be out of the suit: he’s seen a lot of things in ‘Avengers’ and has encountered a lot of powerful people, much more powerful than he is.”

Tony’s latest trip to the workshop will be short-lived, as anyone who saw the “Iron Man 3” trailer already knows: in the movie, our hero’s armor and home are demolished in a horrific assault, “just as he’s starting to realize he needs to be in the suit at all times and in the safety of his workshop,” according to Feige. That devastation pushes Tony on a new, but familiar, path.

“It brings us back to the Tony we met in the first part of ‘Iron Man’ where he’s removed from that convoy and brought to the cave with nothing but a box of scraps,” said Feige. “It’s fun for all of us to watch Tony try to figure out how to get out of that scenario. Much of the movie is Tony in the middle of the country without his tools and a fairly broken suit to help him. But that’s his superpower: he wasn’t born on Asgard, he wasn’t hit by gamma rays, and he doesn’t have the super soldier serum. His power is his brain. It’s fun to put Tony Stark in a corner with nothing and see how he can get out of it.”

Much more in the full article. Geeks, go and read!