For a film such as this, I felt it necessary to bring in a female perspective. While I enjoyed this film for what it was, I felt inadequate to really talk about and review this film. My wife, being a lover of classical literature, stage plays, and such like things, seemed like a good fit to review this film. 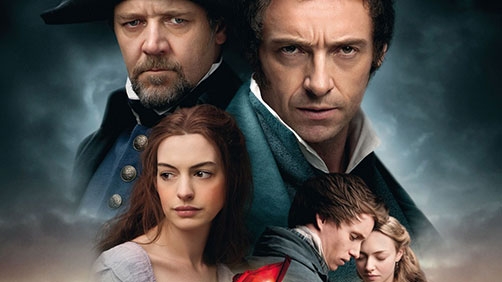 When I first found out that Les Miserables The Musical was coming to the big screen, I was overcome with excitement. Ever since I saw the musical on stage around 12 years ago I have absolutely loved it. It has definitely been the best adaptation of the book that I have seen. Already being familiar with the musical, I was greatly anticipating the movie as I felt they would do it justice. And I must say that it lived up to my expectations. I greatly enjoyed it and felt that it both was true to the book by Victor Hugo and the stage musical.

Because this is a movie version of a musical, this review won’t focus on reviewing the musical as such. Instead I want to focus on the strong and weak points of this adaptation of the musical from stage to screen. That being said I do want to mention just a little about the plot and music for those unfamiliar with the stage musical. The Plot and Music

The basic themes of this story are law, mercy, grace, justice, love, and sacrifice. The characters and music draw parallels between these themes. Here is just one example. Early in the story, Jean Valjean is shown mercy and his response is to turn his soul over to God. Later in the story, Javert is also shown mercy, but in contrast he decides that he can’t live in a world where the law is not supreme and commits suicide. The tune of these two musical pieces (sung by two different characters at opposite ends of the musical) is the same. The audience is clearly supposed to notice the contrast between the two responses to mercy.

There are many more instances where the music is used to help the audience make the comparison in situations. The movie does a good job in being faithful to the musical in this regard.

Those who are not familiar with this musical should be aware that almost the entire performance is sung. There are only a handful of spoken lines in the whole movie. Some people may find this off-putting and a weakness to the storytelling. However, I find that it works to convey the emotions of the characters easier. There are just some things that are better communicated through song than through monologuing to the audience.

Even though I knew what to expect with the sung script, I still found the first five to ten minutes of the movie jarring. I don’t know if it was just because I was getting used to the style or because there was something inherently awkward in how it was filmed, but the singing of the chain gang pulling in the ship just didn’t mesh well. However, once we got through that scene, the rest of the movie was much smoother.

If nothing else, Hugh Jackman’s performance as Jean Valjean made the movie. I can’t even remember a time when I have seen a more moving performance by an actor. His performance of Valjean’s Soliloquy (i.e. What have I done?) near the beginning of the movie was absolutely astounding and brought me to tears by the end of it. Every line was sung with such emotion that it was impossible for the audience to miss. Bring Him Home, the song sung in the barricade about Marius was also incredibly well done. As one of the more difficult songs to sing, Jackman did a phenomenal job singing it and didn’t allow the acting to suffer either. Overall I have absolutely no complaints about Jackman’s performance as Valjean. He clearly threw all of his heart and soul into this role and it shows.

In contrast to Jackson, I was disappointed in Russell Crowe’s performance. The other roles I have seen him in were well done so I was expecting more of the same here. Unfortunately that was not to be. Though the quality of his singing seemed fine, he didn’t seem as comfortable with it as the other actors. As a consequence, much of his performance is wooden. We just don’t see the emotion in Javert that we see in Valjean, Fantine, Marius or even Cosette. This was my biggest disappointment with the film. Fantine is another performance that was extremely well done. The emotion that Anne Hatheway displays as Fantine descends into prostitution was very believable. Her performance of I Dreamed a Dream was another tear jerker. I felt her heartache and desperation with her situation. She was comfortable with the singing and acting and did a great job all around.

My biggest worry with the adaptation of the musical to film was that the actors would not look like they were singing. I was very excited when I heard that they were recording the music as they acted the scenes and was hoping that this weakness would be remedied. I was not disappointed. By giving the actors the ability to sing and act at the same time they were able to infuse so much more emotion into the music. Hugh Jackman definitely took advantage of this ability. However, it could be this need to do two things at once (act and sing) that made Russell Crowe’s performance so wooden.

In my opinion this is one of the best movies of the year. It is well acted, has a good story and of course the music is great. This is definitely one that I will own when it is released for home entertainment.