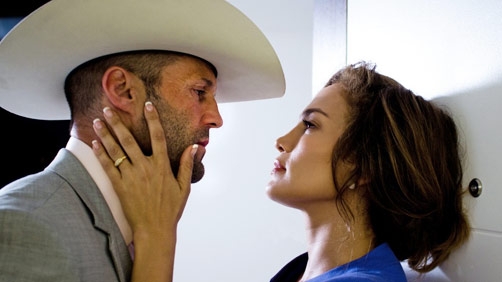 What seems like a heavy-handed spin of the good-bad guy theme that’s popular in cult action films these days only get’s more ridiculous when Parker dawns a white ten-gallon cowboy hat and chases down the thugs that left him for dead to steal back what was rightfully not his. And if that weren’t enough for the cliché juxtapositions, Jennifer Lopez robs the movie blind of its full potential when she turns what should be a crime thriller into a confused amoral chick flick.

Parker (played by Jason Statham is the reinvented Parker of old. It’s the film adaptation of Flashfire, the 19th of 24 Parker novels written by Donald E. Westlake.

When Parker and a band of thieves get together to heist the Ohio State Fair, one of their bumblers causes a fire that hurts patrons and destroys property. In the heat of the moment, hot-headed boss of the gang, Melander, impulsively chooses to lay down an ultimatum to Parker. “Join us for another robbery or die,” Melander says in so many words. Parker boldly attempts to stick to his morals — because he’s the moral type of criminal, what with his getup as a priest when robbing the fair — and gets himself left for dead on the side of the road. Melander’s men think Parker is dead, and they are off to prepare for their next heist.

But Parker is made of stuff tougher than nails. In short order, he’s rescued. He escapes a hospital and chases down Melander’s gang in Palm Beach, Florida to take back what was his from the Ohio State Fair heist. Along the way, it’s Parker against the underworld; it’s the good criminal against the bad criminals.

Parker assumes another undercover identity as a Texan tycoon investing in Palm Beach real estate. His agent, Leslie Rodgers (played by Jennifer Lopez) quickly figures out that Parker is up to no good… and she wants in! In a stupid move, the soft-hearted Parker lets Leslie help him, which ultimately leads to a bloody mess in the worst imaginable predicament of all. What should be a simple face-off for Parker to rub out Melander becomes a ditzy mess.

Per usual, Jason Statham is a fun action protagonist. He never misses a beat for a creative and violent action sequence. One particularly memorable moment in Parker has him forced to plunge a knife through his fist to get the upper hand of a nameless assassin. Moments like this are what the faithful fans of Statham will enjoy.

And act one was clever. Though the Ohio State Fair backdrop was a bit rosy for an otherwise gritty story, the moment that Parker began counseling a security guard in his undercover persona of a priest had me believing in Jason’s Parker. Though it’s not the most effective transition from British action films to American action films, Jason Statham is ever entertaining and sticks to what he’s good at. I only wish for once he would play an honorable good guy. His appearances as the corrupt-criminal-above-reproach is getting old.

Why the Confounding JLO?

Director Taylor Hackford has his cards stacked against him with Parker. The narrative is a simple one that’s complicated by the ditzy character of Leslie Rodgers. The character is as much a problem as Jennifer Lopez playing her. As Rafer Guzmán puts it,

Lopez seems to be in a whole different movie, a working-girl comedy full of high heels and morning lattes. As a result, “Parker” winds up with the worst of both worlds: It’s pointlessly violent and nauseatingly cute.

I don’t know about calling the role of Leslie a comedic one, but the “high heel” fits. Jennifer was meant to play this role, but unfortunately the character stinks for Parker’s movie.

… Parker already has a girl (the safely hidden-away type, played by Emma Booth), and Leslie seems rather baldly attracted to his money more than anything.

That turns “Parker” into yet a third film: a cynical portrayal of greed in post-bailout America. Parker, a fake populist, steals only “from people who can afford it,” which apparently includes the Ohio State Fair. (Those fat cats!) As for Leslie, she’s not just grasping and venal but amoral. “I don’t know what you’re into — kidnapping, extortion, robbery,” she tells Parker. And she wants in!

Leslie is most certainly the primary problem with the film, but there are others. Michael Chiklis is not a convincing leader of the robbers. Nick Nolte’s fatherly figure to Parker is a huge mistake as well. The only voice that can trump Jason Statham’s gravel is Nick’s, and it was so bad in Parker it was difficult to understand a word he said — stealing away from the coolness that Statham’s voice has. Nick is not a great actor anyway.

On a side note, a criminal that does what’s right in his own eyes for selfish gain is not a hero. He might be the protagonist of this movie, but Parker is as villianous as the rest of them. This is detractable to me. Why root for a guy that’s not conflicted with his unethical lifestyle that in the end is no different from the rest of the bad guys? What appears to give Parker a moral code is nothing other than a corrupt interpretation of character values, like trust and loyalty. I could wax nauseatingly now about cultural degredation, but I won’t. Parker doesn’t deserve further time and attention.

Parker is a dicey action film that struggles to live up to the source material from beginning to ending. Jason cannot save the film from the empty themes of moral robbers/murderers. And Lopez just makes what is left embarrassing to all thrillers.