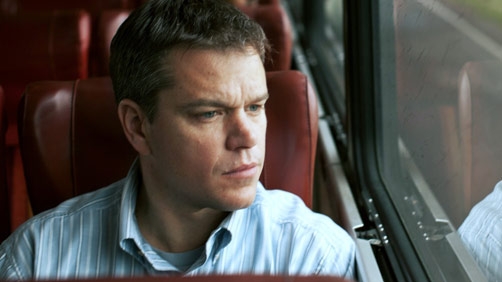 The earnest and well-intentioned Promised Land sports a likable cast, but it also suffers from oversimplified characterizations and a frustrating final act. —RT

Boy, you said it, Rotten Tomatoes.

Matt Damon and John Krasinski are the reasons why anyone went to see the movie, let’s be honest. From the get-go, Promised Land looked like a town hall meeting turned into a movie. It’s a hard sell to audiences, but one that Hollywood couldn’t resist attempting.

As we all know, politics is something people in Hollywood feel strongly about. Director Gus Van Sant is no exception. Promised Land delivers a story with a slant against anyone that would use American land for natural gas, whether there is evidence to support the notion such business is bad for Americans or not. It just is a bad thing, and Promised Land does hardly anything to support that political view. No evidence is necessary to prop up a sappy, shallow argument.

It’s all smoke and mirrors, folks.

Steve Butler (Matt Damon) is an ace corporate salesman who is sent along with his partner, Sue Thomason (Frances McDormand), to close a key rural town in his company’s expansion plans. Global Crosspower Solutions (GCS) want’s America’s natural gas, and nearly promises farmers millions in return for letting them use their farmland. With the town having been hit hard by the economic decline of recent years, the two outsiders see the local citizens as likely to accept their company’s offer, for drilling rights to their properties, as much-needed relief.

What seems like an easy job for the duo becomes complicated by the objection of the respected schoolteacher, Frank Yates (Hal Holbrook) with support from a grassroots environmentalist campaign led by Dustin Noble (John Krasinski). Dustin’s “My Cows Laid Waste on the Countryside” poster catches Steve and Sue offgaurd, ultimately leading the popular opinion to turn against GCS.

Promised Land explores America at the crossroads where big business and the strength of small-town community converge. Along the way, we get a traditional morality tale about honesty and how important it is to have integrity. “Without integrity, nobody wins” is very well the theme of Promised Land.

What stood out to me were the performances. Most every performance great and small is charming and nuanced. It’s all-natural. The dialogue is usually amusing and sometimes heartfelt. The town’s people and the reps from GCS simply behave in earnest.

Like Matt Damon says about the skill of director Gus Van Sant, “He really is a brilliant director. His understanding of human behavior just has the best BS detector I’ve ever seen. The notes that he gives you as a director are so insightful and necessary — he has only ever given me notes that are necessary and really helpful.” Gus’ strength in directing performances truly shines in Promised Land.

I enjoy me some American countryside, and the location for Promised Land (Pennsylvania) doesn’t disappoint. The cinematography focuses only on the right things at the right times. When audiences need a lot of gorgeous farmland in the background, the movie delivers.

And some might not take a shine to the pace, which is old fashioned and leisurely, but I enjoyed this for sentimental reasons. I have family that lives/lived in the country, and the lifestyle the film represents for small town America felt just like the memories I have of farm country. Promised Land couldn’t have depicted a more beautiful American homeland.

Was I entertained? Yes. Was I convinced? No. So the movie fails in its mission. When a soapbox movie can’t convince you the moral of the story is true, then it fails to achieve a very basic purpose of storytelling. People want to be enlightened through stories. This movie tries to enlighten. Most people go away disagreeing with the message on some wavelength, so it fails.

Make no mistake: the movie is a platform for environmentalism. Though it’s not the most aggressive political message in a movie I have seen, it’s there for all of the film.

When Steve Butler learns that Dustin the environmentalist works for GCS, it’s Steve’s conclusion that GCS is corrupt. While it is true that GCS would play both sides of the argument — for and against their drilling business — to win business deceptively, it isn’t logical or rational to conclude that the drilling that GCS would do is inherently bad for the environment. So, here we have GCS playing both sides of the argument. This is why, the story tells us, Global cannot be trusted, nor are they innocent — in all matters of their business. The film leaves you assuming the town will oppose the gas company for their deceitful practices. More importantly, if the company is lying about something it’s because they have far more subversive things to hide.

But isn’t that what the film is doing? Promised Land is a production by environmental activists in Hollywood. By producing the story, these environmentalists get to play both sides of the argument for the real world audience. They don’t give the natural gas company a fair shake.[^1] They obscure real evidence for or against the doings of natural gas companies.

But by the end of the film, the producers hope you have turned off your brain and assumed that, somehow, all of the logic and knowledge presented in the movie should all come together to deliver you a brilliant clincher: Global Crosspower Solutions is devious, so they must be up to no good. This conclusion is a logical fallacy, for if this is true, then so are the environmentalists that made this movie — hypocritical, I should say.

So the subtext of the film spoils the heart of the film. Matt’s aiming to convince you that “Something that looks too good to be true probably is,” and he is absolutely right. But the same can be said about his movie: The film that looks like it presents all the facts probably isn’t.

Promised Land might have been better with a solid case against the natural gas company. Even so, the film implies all gas companies like Global are guilty of the same crimes against the environment. This too is irrational… So the movie needed to be re-worked in many areas to sell a convincing theme.