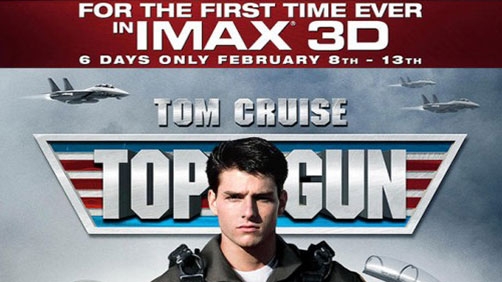 Thumbs up if you’re excited to see Tom Cruise return to the screen in a re-release of Top Gun, this time in IMAX 3D!  The 1986 Tony Scott-directed action classic will open in select IMAX 3D theaters on February 8th and run until February 13th.  The remastered edition will also debut on a two-disc Blu-ray in 2D and 3D versions starting February 19th.  A new trailer for Top Gun IMAX 3D is now available for your viewing pleasure and nostalgia.  You have permission to hit the jump, Ghost Rider.

Oh. My. Word! The pain! THE PAIN! Watching that trailer has brought back so much PAIN! My eyes, MY EYES! Anyone have any bleach?

Seriously, what are they gonna show in 3D? Volleyballs flying at me? And it’s just such a horrible movie with no discernible plot — not one that’s interesting anyway — and REALLY BAD ‘80s music. I’m talking like the worst of the ‘80s. I will not be seeing this one!

And there’s also this so that you can experience my pain more fully: