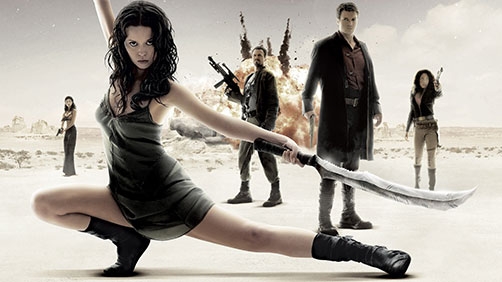 Even after all this time, “Not only is there a want from fans, but there’s a want from Joss [Whedon], and from Nathan [Fillion], certainly, and the cast,” Tudyk confirms.

But even if there is a will, is there actually a way? Talking more logistically about how it could actually work, Tudyk points to Arrested Development as an example of how the show could be brought back. “This was taken off the air right about the same time that we were,” he says, “and that was a show that was on Fox, with a bunch of people who have gone on to do many other things, and they’re getting them back together for another 14 episodes. So it can be done.”

That’s a good and encouraging point.

When we ask – a little skeptically – whether there might come a time when it’ll simply be too late to bring the show back, Tudyk is insistent that this fandom doesn’t have an expiration date. Because, while “all the characters were great, and everyone was important,” ultimately Tudyk believes that, “as long as we’ve got Mal, I think that you can stitch it back together.”

And in Tudyk’s opinion, that could happen at any time after Castle ends and there’s a break in Fillion’s schedule. “He could be 50 when that happens,” he says enthusiastically, going on to share his (suprisingly detailed) idea of how the story could continue: “You could find Mal living on some moon somewhere, and then somebody finds him. It’s that old set-up where somebody finds him and they’re like, ‘you’re needed.’ Something happens that he saddles back up, gets in the ship and goes. And he puts the band back together. And finds everybody wherever they are, to go do something.”