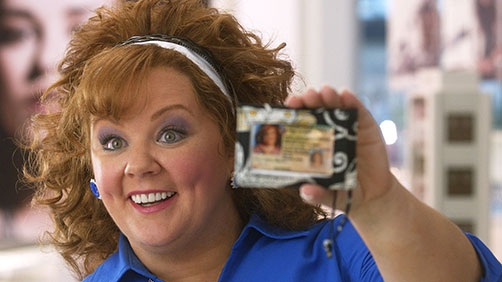 Identity thief suffers from a fundamental flaw. On the one hand, it wants to be a funny and non-serious film full of slapstick humor and cartoony violence that would hospitalize real world people. On the other hand it wants to be taken as a serious drama at other points of the film. While this has been done before, and has even worked for some films, it fails miserably here. Doing a film in the manner I have described, like having your cake and eating it too, is very tricky business.

Diana (Melissa McCarthy) is established as the identity thief here, she’s living it up big down in Florida, steeling identities and credit cards, maxing out said credit cards, and moving on to the next victim. Sandy Patterson (Jason Bateman) is just the next victim in a long line of victims.. Diana is also a pathological liar — She just can’t not lie. It is this sort of thing that very much works against the film’s drama. In one particular scene, after nearly 1 1/2 hours of continual lying, and showing no remorse whatsoever, Diana, through a series of circumstances that make you think it’s possible, begins crying to Sandy and telling him about her childhood and what has led her here. Despite a bit of incredulity you find yourself a bit drawn in. Are we seeing the real Diana now? Are we seeing what has led to this, has the shell been cracked, is he getting through? But nope, she was lying, she was leading him on, it’s what she does. After this, nothing else serious in the film is believable again. It was the crushing blow to the film’s dramatic elements.

And are we really supposed to believe that there was simply nothing law enforcement was willing or able to do about the identity theft going on? We all may have different varying feelings about law enforcement in this country, but by all accounts they take identity theft very seriously and I do know from having had credit cards stolen and bogus charges showing up on my own account that neither law enforcement nor financial institutions stand by and do nothing while it happens once it is obvious what is going on as is the case in the film with Sandy Patterson. And why should identity theft which Sandy is not responsible for cost him his job? It makes no sense. In fact, not much of the plot makes sense at all. I know it’s a comedy, but it needs to be just a bit more believable than this.

One of the most lame parts of the film is the subplot of the villains who had been “had” by Diana. The first were some sort of non-couple working for some dude in prison who is not fleshed out. She ripped them off somehow and they want payback. Obviously Sandy gets mixed up in this.

Then there’s a bounty hunter chasing her down as well. He’s also not fleshed out and the villains subplot never really goes anywhere, only provides a little bit of humor, and stumbling road blocks for Sandy on his quest to get Diana back to his home state. It was pretty lame.

The film is rated R, but I was still surprised by some of the crudeness. If you want to catch a good fun film for laughs but would rather avoid way more than suggestive sexual content, best avoid this one.

It’s one thing to do it and allude to it then move on, but the big sex scene just seemed to go on and on long after any humor in the situation was over. The humor supposed to be present is that Sandy cannot let Diana out of his site lest she take off again and go on with her identity theft. She picks up a guy at the bar and brings him back to the hotel. This might have been a bit funny if cut off at the right time, but it goes on and on and on… and on. Funny is no longer funny when you push it too far. When you play it up just to be edgy it’s no longer funny.

There are of course some genuine laughs in this film, but not as many as you would expect from a comedy. Some stuff was just too stupid to be laughed at, some was so lame that you ask yourself, “Oh, was I supposed to laugh at that one? Oh well, maybe the next gag will be funny.” But there were some genuinely funny moments, such as the gas station attendant cutting the card (though I’ve never heard of this practice in real life, it’s not the gas station attendants job, but it’s still funny). But overall it was very much not worth it.

Let this one go folks, it’s not worth watching — not in theaters, not on home video, not ever. Don’t do it, just don’t.