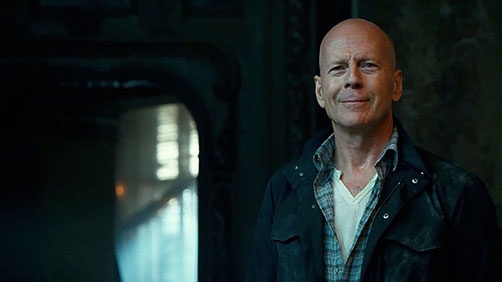 Remember Hans Gruber, Simon Gruber, Col, Stuart, and even Thomas Gabriel as the baddies in the previous four Die Hard Films? Well don’t go looking for the likes of them here because you will be disappointed. Also remember how John McClane was a blunt but intelligent weapon of the law, and how he cared what happened to the people around him? That’s gone from this film too.

Oh, and remember how the plots of the previous films made sense, simple though the plots were? Well don’t expect everything to make sense this time out, because it’s not going to.

A lot of elements just didn’t add up for this film. That’s not to say that the film was no fun at all, but it is to say that it doesn’t live up to the legacy that was left to it — and that’s not good since none of the previous Die Hard films are 4 or 5 star films (well, maybe in some ways you could justify giving the first one 4 stars).

In Russia, Car Drives You

This film doesn’t waste any time on trivial details like plot build up or story set up. No, nothing like that, it just dumps you right in to the action. And it’s not long before John McClane, New York Cop, is mowing people down in big trucks and SUVs on the streets of Russia with hardly a cop or law enforcement presence to be seen. One wonders what happened to the John McClane who cared about people, the one who wasn’t the same as the bad guys he was fighting? Has cynicism taken him over and made him a cold blooded killer just so he can get to the bad guys in what ever way he chooses?

In the past, John McClane has no problem killing bad guys, and if good guys or innocents die, and he couldn’t prevent it, well he didn’t waste time mourning the loss, he made the best he could of it. But this version of John McClane is mowing down civilians in the street in his big vehicles.

So how did we get here. Well, John finds out that his son has been apprehended in Russia and is going to trial. He’s likely going to get a life sentence so John decides he needs to go see what he can do about it. It’s unclear what he planned to do or what he thought he was going to do. But soon he finds out he’s in the middle of some sort of spy garbage and his son is working for the CIA. And, as a civilian law enforcement officer from New York and no jurisdiction at all he deicides he’s going to intervene. This really screws up the op his son is working on, causing Langley to abort the mission and leaving the good guys in Russia holding a very short and muddied stick.

John goes tearing after his son and the man he’s trying to smuggle out of Russia pell mell, all other humans are of no concern. This is where John is crushing cars on the streets of Russia and generally causing mayhem. It’s played up for comedy at times, as drama, and as general obstacles to overcome at other times during this very overlong non-stop hard to follow, herky jerky car chase sequence that takes over the first act of the film. And though it’s glossed over, if you are in a car in traffic when John McClane drives over the top of you and crushes down the roof to the steering wheel, you will die. There’s no way around it. This is not the John McClane I remember. This John McClane is a thug, not a hero.

Are All of Hollywood’s Choreographers Missing?

And what about that cinematography? I mean seriously, I couldn’t follow much of the action at all in this film, and much of the plot was obscured by too much heavy Russian accent I could not comprehend or was just simply non-sensical. During any of the heavy action sequences, all cameras went hand held, and the shutter was dialed up to a dizzyingly high rate and the results are extremely dissatisfying and nearly vomit inducing. Though not as bad as what I experienced during the recent Red Dawn remake, I did get just a bit motion sick here and there, and that does not happen often to me. It is, simply put, bad cinematography, bad choreography, and bad filmmaking. It’s a bunch of cheap tricks employed to make the film feel actiony instead of actually infusing it with action. There’s no sense of space or sense in the action, and when I say this, I mean it is a far worse attrocity than the average post-Bourne series shakycam driven action sequence. This is shakycam explosion porn.

And the hard to follow-ness of the film doesn’t just end with the choreography, there were a lot of times when the sound mix overpowered the vocals so much that I could only hear half of what was being said, and usually it sounded like at least semi-important plot points I was missing.

And what happened to McClanes cleverness? In past films, not only was McClane unafraid of pain and suffering to accomplish his goals, but he was also clever. But not here. Guns, running, car chasing is all you get, no clever way to solve any problems.

There’s also a confusing villain hierarchy in this film and on the one hand, it kind of works — I didn’t quite see all the angles coming that were brought about, but I also found it just a bit hard to follow, as with many plot points of the film.

First there’s the guy we think is going to be the main focus as a villain, Alik. It is obvious the filmmakers are trying to make him the type of guy that revels in violence and loves the free-for-all style. But it really didn’t work well at all. And when John McClane, in his comparatively tiny SUV pulls up beside Alik in the big army truck and barks out “Remember me?” you wonder if you missed some part of the film’s backstory, or if something was cut that would have made that line make sense.

Then there’s the Russian Defense Minister who seems to be the larger focus of the plot. If he carries out whatever plan of his it is that I could not quite decipher, then it’s apparently bad juju for the Americans.

There’s Irina, daughter of who we think is the good guy Russian dude, Komarov, who has some nebulous file that will incriminate the defense minister. She turns on daddy apparently, and seems to be in charge of the bad guys at times.

Then there’s Komarov, who’s angle and plot were probably the most easily followed in the film. His angle is to get back to Chernobyl, where he left a pretty big pile of weapons grade uranium he would like to have back so he can be an evil and filthy rich dude.

If Live Free or Die Hard was about John coming to terms with his daughter Lucy, at least to some extent, then this film is about reconciling John and John Jr. But not much time is taken on developing that and I would have liked to see more. And in fact, I wished that Lucy and Justin Long’s Character from the previous film who doesn’t even appear in this film, Matt Farrell, had somehow had a larger role to play. As it is, this is about John and John Jr., and the whole rest of the cast that we don’t know in any way.

What do you really think TJ?

This film is a disapointment on so many levels and I certainly cannot recomend catching this in the theater. Go rent the original Die Hard and spend your night at home instead, it’s a far better film (plus, the popcorn is far cheaper and you can butter and salt it to your specifications).