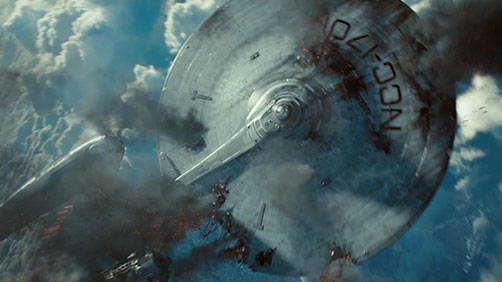 The Super Bowl Commercial for Star Trek Into Darkness is just half a minute but mixed in with stuff we saw in the previous two trailers is some new (and very interesting) stuff, along with some new (and very intriguing) dialogue. Below TrekMovie has a full shot-by-shot analysis of the commercial. We also have caps of what was in the ‘extended’ version available on the mobile app. As always, beware of Spoilers.

I think the thing that caught my attention the most when I watched the trailer was this:

GOODBYE ENTERPRISE ALERT?!
The above (and below) shots are somewhat reminiscent of the destruction of the original NCC_1701 in Star Trek III: The Search For Spock. The ship has sustained a lot of damage and is shedding parts as it heads to a planet. Are we going to get a NCC-1701-A in the next movie? If not a replacement the ship is going to at least need to get a major overhaul, so is there a refit in the future?

My first thoughts, was DANG IT! ARE THEY DESTROYING THE ENTERPRISE?!? AGAIN!?! Ugh! I actually scrolled back and paused the frame so I could make sure the registry number was NCC-1701!

Here are the shots:

And for fun, here’s the original refit enterprise after self destructing in Star Trek III. This blow up the Enterprise business is really getting old. But it looks like that’s what Abrams is about to put on us. It’s hard to see how this is just typical trailer misdirection. Still, I’ll keep my hopes up. We’ll see.

Check out the full article for all the fun details!