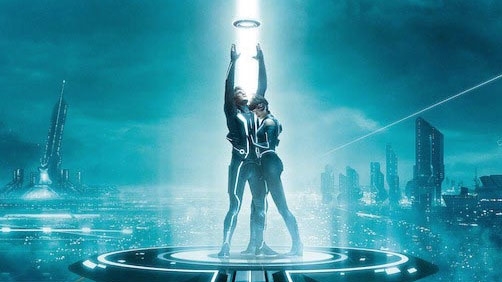 Perhaps the most unappreciated blockbuster success of 2010, Disney’s live action sci-fi/fantasy is a faithful continuation of the TRON franchise with returning cast members and filmmakers. It boasts state-of-the-art computer animation set in live action; a film rich with drama, low on clichés.

Let’s get one thing out of the way: I missed The Matrix craze.

My parents were very restrictive, so they wouldn’t dream of showing an R rated film to me as an adolescent. Since I was severed from a great number of science fictionals as a result, I started to explore the wonderful world of the genre after I left my Dad’s house. It was only then I got the chance to finish my childhood with action/adventures set in highly-stylized sci-fi fantasies.

The Matrix, The Fifth Element, I, Robot and the like are ambitious flights of fantasy set in cyber worlds. They don’t often excel in characters, acting, or dialogue — or original story for that matter. Rather, they lean heavily on tried and true myth constructs and give them new flavoring through futuristic digital landscapes. Where they appeal the most is in their extremes, their distinguished visual effects, imaginative worlds, and super-advanced technologies. Among my personal favorites in this niche of the sub-genre called cyberpunk is TRON: Legacy,1 but not the original TRON film, which I think grossly suffers from filmmaking limitations of its time and a convoluted storyline. Legacy better represents the finer traits of its predecessor, much like The Rescuers Down Under does for The Rescuers (not to degrade TRON with that comparison).

Of course, not everyone agrees with me. Rotten Tomatoes sums up acclaim for TRON with the following:

Though perhaps not as strong dramatically as it is technologically, TRON is an original and visually stunning piece of science fiction that represents a landmark work in the history of computer animation.

And Rotten Tomatoes has this to say for the sequel:

Tron Legacy boasts dazzling visuals, but its human characters and story get lost amidst its state-of-the-art production design.

Notice how similar those two descriptions are? It seems the TRON films are faithful to each other by what people say about them, but if you watch them side-by-side I’m sure that you will agree with me that there is a world of difference between the two TRONs. The one is as ugly as sin and offbeat while the other is gorgeous and savvy.

Whatever your own star rating may be, you should agree with me on this: there’s something about the very idea of TRON you want to like. It is jam-packed with the hopes and dreams of our childhood adventures, and is set with digital whimsy and colorful action sequences. If you don’t agree, then you probably have little interest in the cyberpunk sub-genre. My guess is you are ruined by watching too much professional sports.2

In the spring of 1989, Kevin Flynn (Jeff Bridges), software engineer and CEO of ENCOM International, disappeared. Twenty years later, Kevin’s son, Sam (Garrett Hedlund), now ENCOM’s primary shareholder, takes little interest in the company beyond playing an infrequent trick on the board of directors. Even so, Sam is requested by his father’s friend, ENCOM executive Alan Bradley (Bruce Boxleitner), to investigate a message originating from Kevin’s shuttered video game arcade. There, Sam discovers a large computer in a secret basement. Sam then unintentionally teleports himself to The Grid, a virtual reality created by his father.

On The Grid, Sam is captured by policing programs (that look and behave like human beings) and is sent to the city’s gladiatorial games to compete against other program of the system. After escaping one of the closed arenas he is caught in another and is forced to fight a masked program called Rinzler who, having realized that Sam is a human User after seeing him bleed, takes him before CLU, the program authoritarian who resembles a younger Kevin Flynn (created by the real Kevin Flynn many years earlier). The malevolent CLU nearly kills Sam in a Light Cycle match; But in an surprise rescue, Quorra (Olivia Wilde), Kevin’s apprentice, conveys Sam to his father outside CLU’s territory on The Grid. At Kevin’s secret hideout, Kevin explains to Sam that he, many years ago, had been working to create a virtual reality and had appointed CLU and Tron (a security program created by Bradley) its co-creators. During their construction work, the trio discovered a species of miraculously-occurring isomorphic algorithms (ISOs, bearing the likeness of human beings but with “perfect” genetic code), not conceived by Kevin, exhibiting the potential to answer various mysteries in science, religion, and medicine. CLU, having deemed ISOs an aberration, betrayed Kevin, captured Tron, and destroyed the ISOs. And in the meantime, the in/out portal permitting travel between the digital world and the physical one had automatically closed, leaving Flynn captive. Many years past.

Now in control of The Grid but stalemated, CLU arranged a message be sent to Bradley (outside The Grid) in order to lure Sam onto The Grid, opening the portal once again. Additionally, as Kevin’s identity disc is the master key to The Grid and only way to go through the portal, CLU expects the Flynns to flee for the portal so that he may take Kevin’s disc and go through the portal himself to impose his dominion strategy on the world at large, thus fulfilling a twisted interpretation of Kevin’s original vision for The Grid.

Joseph Kosinski started his directorial filmography with TRON: Legacy. Considering the stunning attention to detail in every aspect of the film, it’s a job well done. The story, characters, visual effects, music… it’s all here. Legacy looks like a masterpiece.

The film is also a brilliant tribute to the TRON (1982) material. For its day, TRON was also considered a visual masterpiece. Its director, Steven Lisberger, produced TRON: Legacy. It would seem that Legacy does for visual effects what TRON did back in the day. Both films dramatically raised the bar for live action computer animation.

Though the Light Cycles, gladiatorial game arena, flying machines, and city of The Grid are wonderfully executed works of art, what stands out particularly is the animation of CLU, who was based on a 32-year-old version of Jeff Bridges. Jeff, up in years and looking little like his younger self, acted CLU’s scenes. A body double then mimicked Jeff in the physical performance to represent CLU’s own body in a Grid suit. Then, the body double’s head was digitally replaced with the CG head of CLU which was animated using motion tracking of Jeff Bridge’s face. It doesn’t appear flawless, but most audiences don’t realize it’s computer animation until they are told — then they spot the subtleties in the animation that give it away. Despite the somewhat flat performance of CLU by Bridges, he looks and seems authentically human. Outstanding. Something that stood out to me on a personal level in Legacy is the father/son relationship of the Flynns. Though it is a straightforward one with simple characters — characters that remind you of Luke Skywalker in terms of their not-so dynamic personalities — theirs is a meaningful relationship. There is deep-seeded drama between them that echoes spirituality.

There is no end to the ways Kevin is likened to The Creator, God, in Legacy. Since I am religious, I found this symbology a refreshing one that is rarely explored in fiction. Kevin is consistently a fallen and depraved man, yet he still symbolizes The Creator, and I thoroughly enjoy this creative theme. To a lesser extent, Sam represents God the Son through his unconditional love for his father. Good stuff.

Lastly, I want to mention that if you get no other enjoyment from TRON: Legacy, you should be delighted with the soundtrack. Shortly after I saw the movie the first time, I made a playlist of it on my iPod,3 and I listen to it every few days. Composer Hans Zimmer co-wrote the themes with Daft Punk. The blend of orchestral and electronic sound is some of the best ever. It excels in viewing the film and listening to it on its own.

I’m a patient guy, but most people in general audiences are not. Many have noted the slow pace of Legacy and it bothers them. Others note that it is so slow they have trouble keeping awake. It doesn’t help that most of the events in the film happen at night time, so there’s no break from the gloomy colors and dark shadows.

Still, other critics are unhappy with the simplicity of the narrative. It’s a very linear story with few unexpected twists. There are few “dynamic” characters to liven up the dialogue. It feels like “plain vanilla” apart from the cool style of The Grid’s odds and ends.

Personally, none of this bothers me. I don’t need all of my favorite films to bake in the same key ingredients that appear to tantalize most in general audiences. Those things that Legacy appears to lack? Clichés, people. What the film lacks are the normal pitfalls encountered by including the same-old fluff that most audiences want, but induce large amounts of banality. I think when thoughtfully considered, and when watched by fully-rested and alert people, TRON: Legacy has a lot to offer sci-fi enthusiasts. TRON: Legacy isn’t a critical success, but it is a monetary one. It was produced with $170 million and it has grossed $400 million worldwide. True, it didn’t profit much domestically, but Disney’s wide movie releases don’t need to these days. If the global audience is in favor, who can really criticize it? Someone — no, a lot of someones are enjoying this film.

Geeks with a big heart love the story, setting, effects, and even the characters. There’s a few quotables that make it memorable along the way, like, “Bio-digital jazz, man.”

Well, that’s how I will sum it up: It’s bio-digital jazz, man.