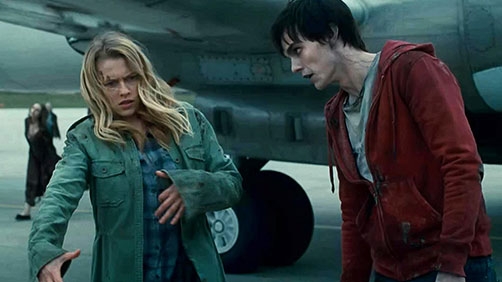 “What’s wrong with me? I just want to connect. Why can’t I connect with people? Oh, right, it’s cause I’m dead. I shouldn’t be so hard on myself, I mean, we’re all dead. This girl’s dead. That guy’s dead. That guy in the corner is definitely dead. These guys look awful.”

I had to do a double take when I looked at the Tomato Meter at Rotten Tomatoes. As of this writing it is averaging a 77% approval rating from the critics and an 83% from the audience. That’s… weird. Maybe it’s not surprising that the audience rated it so highly, given that there is not a whole lot of good happening in the cinema right now (though I can name a couple better films off the top of my head).

So I turned to trusty Ebert for a good lampooning. I was shocked — SHOCKED — to discover that he liked the film. He rated it 3.5 of 4 stars. What on earth?

It’s a Zombie movie — A ZOMBIE MOVIE for crying out loud. I grant you it’s a bit of an unusual one, and if the story, the effects, and the acting warranted it, I could see liking one (as I grudgingly admit that I like the Twilight films, well those after the first one). But I don’t as a rule like Zombie films.

That said, I did go into the theater with what I hope is an unbiased look at the film. I try to do that with all the films I decide to go see. But honestly — if you’ll permit me the gag — this film needs to take advantage of one of the brains it’s zombies eat. Any brain will be better than the lack of one it’s stuck with, any brain at all.

What is the plot? Do tell

Meet “R”. R is a zombie who can’t remember his name but he thinks it started with “R”. He also can’t really talk, but he can apparently still think, at least to some extent and so we are treated to his thoughts narrating — well at least for the first part of the film. Narration becomes sporadic after the first act. In his thought narration, R knows he’s a zombie, and he “almost feels bad” about eating human flesh. But he seems to be a bit of an unusual zombie (though no reason is ever given why he’s unusual to start with). He’s made a sort of apartment out of a grounded airliner, he listens to music and collects records (I am talking about those old vinyl discs that mysteriously play music). All sorts of weird stuff for an undead person.

And now meet Julie. Julie is pretty much your standard angsty teenager, but she’s got to do her part to gather food and supplies out there where the zombies dwell. She has apparently been trained, along with a team of other youngsters (why was there no older and wiser supervision? but I digress). Her boyfriend is also part of the team. While out gathering supplies, R and a group of zombies happen by and start killing and devouring those in sight.

Upon consuming Julie’s boyfriend’s brains, he begins to get his memories. And apparently since he’s already a bit of an unusual zombie, this has a serious impact on him. As he sees Julie, instead of eating her he protects her and takes her back to his “apartment”. He proceeds to attempt to woo her, saying often to himself, “don’t be creepy, don’t be creepy!” Well, she winds up falling for him as he has fallen for her. He starts slowly speaking again, other zombies start coming to life again (it is unclear exactly what triggers this — though I think we are supposed to believe that the other zombies just seeing R and Julie hold hands is what does it, but that’s just stupid).

Of course we still need to deal with bonies… oh right, bonies are zombies that have given up, torn off all their dead skin and become nothing but bones. There is no hope for them anymore. So they need to be dealt with, and they don’t like the fact that the regular zombies are coming back to life and they are going to go on the warpath and apparently kill all the regular zombies and the rest of the living humans in the process.

The zombies want to unite with the humans and “help”. Julie’s dad (John Malkovich) who is in charge of those that are left, does not believe the zombies can change. Eventually, the show down leads him to shoot R who starts to bleed. He is convinced, everyone offs all the bonies, the zombies reintegrate into society, everyone lives happily ever after.

Of all the things one can complain about with this film, we first need to have a serious talk about the acting. What exactly went wrong here? The only decent bits of acting came from two of the most minor roles in the film. They utterly failed to use John Malkovich to any potential whatsoever. I mean why was he even in this film? I can only surmise that they were able to cast him around a busy schedule and pay him a handsome fee to get his “star power” name in the credits and advertise the fact that “Malkovich was here.” It’s a shame really because the film could have used a lot more of him. The other actor, or actress as the case may be here, that did a stand out job when she was on screen, was Analeigh Tipton. Why couldn’t we have had more acting like that?

Our two leads utterly failed to inspire me to anything or make me even believe that they were in the situations they were purported to be in. Particularly, Teresa Palmer utterly failed to convince me that she was in the midst of zombies and in mortal danger. In fact the majority of her lines are either completely devoid of any feeling whatsoever, or they are so forcefully over-delivered as to actually, (almost) literally be felt by the audience as sharp, searing pain. My wife and I both observed that she seemed like a strange and unholy cross between Kristen Stewart and Hayden Panettiere — only in the worst possible way, as if she has somehow absorbed the worst qualities of both actresses. In the case of either of those two actresses, there are fine acting qualities to be observed (particularly in the case of Hayden). As for Teresa, I sincerely hope she improves her abilities, or that I never see her again in any film. It was just painful.

Of course the real lead here is Nicholas Hoult, known to me only for his performance in X-Men: First Class. I had no feelings about him one way or the other in that film. Here, he is pretty underwhelming actually. Perhaps it’s the role he plays here, the hulking, lurking, undead zombie, but it feels to me like he has a hard time taking his role seriously at all.

Narration can be done well, and it can be done poorly. This film does both. At first, the narration is pretty good. It both gives us information and it carries a lot of humor. As we move past the first act the narration becomes sporadic at best, at times, things are even just left hanging. If you are going to go with narration, you have to keep it up and do it right, this film failed at that and it made for a pretty poor viewing experience as the film went on.

I never for a second bought the love story between zombie and human. I mean, seriously, zombie consumes boyfriend, zombie gets boyfriend memories, zombie falls for girl, girl falls for boyfriend eating zombie, girl can’t act and convince us she’s feeling appropriate emotions through all this, they live happily ever after. Nope, didn’t work. Eating a girl’s boyfriend, and then kidnapping her and holding her hostage is never a good choice for wooing a girl, and would never actually work.

And what is up with the whole, “he gains his victims memories by eating the brains” thing. Is that a normal zombie thing? because I’ve never heard that one before. It was dumb. We are never actually told why R is different from other zombies, and why in turn then the other zombies start coming back to life as well. We just have to accept that it is so. I don’t mind things being a bit mysterious or unexplainable at times, but this was a bit much. These guys are dead, they eat people, they love brains, etc. Surely R would have gotten someone else’s memories that would have triggered the same reaction at some point right? And on the same token, we are never told what caused the apocalypse to begin with. The apocalypse just is, the zombies and their condition just are, their healing just is, everything is spoon fed to us and we are asked to just believe it as it is appears and don’t ask questions! But I like to get into my material, I like to dig deep, and this fails utterly at that.

The film isn’t a total disaster (just enough of one that I would recommend not wasting your money in the theater). It did entertain me and I got many a laugh out the things happening and the situation humor as well as R’s narrated humor. It was not boring, my complaints simply center on the shallowness and lack of “brains” the film has.

And it does have to be said that those plot elements that do exist in this film are either original, or an original twist on an old story, and this does help to bring it up from the icy depths of a single star review.

But In the end…

Save your money. If you really need to see it, catch it when it comes out on Home Video.