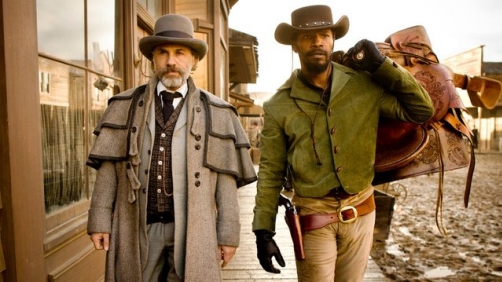 So sings Luis Bacalov in the opening titles of Django Unchained, the second in a series(?) of revisionist history/revenge epics from the ever-controversial Quentin Tarantino. Inglourious Basterds handed the reigns of vengeance to a band of Jewish Nazi-hunters (thereby conjuring up a far more incendiary conclusion to WWII than the one where Hitler cried ‘Uncle!’). In this case, the injured party who gets bloody satisfaction is Django (played by Jamie Foxx), a slave-turned-gunslinger who teams up with German-born bounty hunter Dr. King Schultz (played by Christoph Waltz, in an Oscar-winning performance).

Schultz — who has one of the most memorable entrances of any character in recent cinematic history — is in hot pursuit of the Brittle brothers, and only Django lead him to them. But Django has a goal of his own: to find and free his bride, Broomhilda (played by Kerry Washington), who was separated from him many years ago. Schultz agrees to help his young protege, and their quest ultimately leads them to Calvin Candie (played by Leonardo DiCaprio), owner of the most infamous plantation in the South: Candyland.

Yes, avid board-gamers, you read that right. Candyland. Just don’t let it fool you. The name is the only sweet thing about the place. Say what you will about QT, but there’s no denying the man knows how to spin an entertaining yarn. He does it again in Django, which is no less a western for taking place in the antebellum South. Everything audiences have come to expect of Tarantino is here in spades: terrific writing, remarkable characters, quirky storytelling, and bizarrely awesome musical numbers. Violence is here, too, accompanied by enough gore to paint half of Albuquerque a cheery shade of red. More on that in a minute.

Foxx and DiCaprio are splendid in their roles, as is Washington, who brings an unexpected amount of depth to Broomhilda’s character. But the loudest applause belongs to Waltz, who steals each and every scene he’s in with jaw-dropping ease. If you thought he was good in Basterds, well, his work in Django blows all of that right out of the water. It’s an explosive performance. Tarantino’s cameo has nothing on it (inside joke there, I just couldn’t resist).

If there are problems with Django, and there are, the finale is a big one. Having established a colorful cast of characters and the incredibly high stakes of the conflict, Tarantino stumbles in delivering the payoff, wandering about in the final half hour from one possible ending to the next. This seeming inability to know when and how to stop is an unpleasant departure from the bloat-free excellence of the first two hours.

Gory violence is pretty much par for the course for any Tarantino film. Django‘s R-rating (received for, among other things, “strong graphic violence throughout”) is well earned. Take that into careful consideration before seeing it. You’ll be in for a nasty shock otherwise.

There are essentially two types of violence depicted here: cartoonish gun battles featuring absurd amounts of blood splatter, and vicious slave trade cruelties that make the gut churn and the eye falter. It’s a jarring (and frequently tasteless) combination. One minute Tarantino invites us to laugh as baddies are riddled with lead, and the next minute he asks us to sober down as two slaves are forced to fight to the death on the floor of a rich man’s living room. David Denby writes in The New Yorker,

The basic mechanism of exploitation is this: some bad person commits repeated atrocities against the innocent. This sets the grounds for retaliation, because the good persons and their allies have reasons to take revenge. Their violence is justified. They have been provoked and abused, haven’t they? The greater the initial assault, the more deserved the punishment. That way the audience can feel happy and morally assured in the display of violence—after all, the victims had it coming. Let the blood flow in all righteousness.

In the end, Django takes his revenge, killing dozens of white men and women, and the blood explodes off the bodies in little bursts of red. We’re meant to understand that the violence isn’t “real,” that it’s hyperbolic. There’s even grisly little joke about it. One of the bad guys is used as a shield by Django, and the sap gets shot again and again, and he howls. It’s funny, in a sick way. But how many jokes can you appreciate before you begin to feel a little rotten? There’s no real hero here, because in the end, no real justice has been served: just “good old-fashioned vengeance.” It’s stylishly plated and served piping hot, but the taste is no less bitter. Django’s quest to rescue Broomhilda is a poignant and powerful one – until it becomes clear that even the rescue of his bride takes a back seat to killing as many white people as possible. One song on the soundtrack sums up his attitude perfectly:

I’m not afraid to do the Lord’s work
You say vengeance is his, but I’m going to do it first.

Django sets out to slay a violent monster, and ends up becoming one himself.

Could Tarantino be making this point deliberately? Perhaps. But it’s a big perhaps. Tarantino seems acutely aware of the way violence numbs the moral sensibilities (a recurring theme in Django and Basterds) yet that doesn’t stop him from reveling in onscreen bloodshed and asking moviegoers to do it, too.

So, say what you will about QT, but there’s no denying his filmmaking is a messy business.

Django Unchained will be available for home entertainment April 16, 2013 (details at Amazon.com).