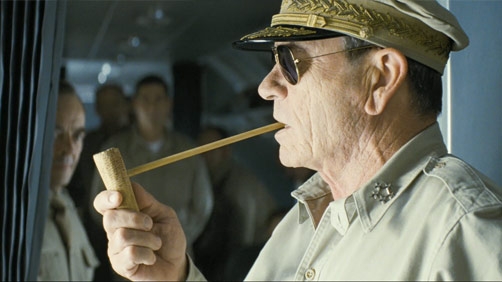 I sat down to watch Emperor expecting the larger-than-life persona of General Douglas MacArthur to blow me away through the performance of Tommy Lee Jones. By the end of the film, there would be several vocal exclamations from the audience endeared to his beguiling reenactment, much the way audiences responded to Tommy’s performance of Thaddeus Stevens in Lincoln (2012). The emperor of Emperor would be Douglas/Tommy.

While Tommy’s acting was as good as ever, the film took a different turn. Rather than dwelling on the general and his greatness, it is a close look at one of the men behind MacArthur that made him look great. Brigadier General Bonner Fellers might be the man responsible for Japan as we know it today.1 Fellers is given the insurmountable task of investigating Japanese Emperor Hirohito’s role in the lead up to war: most specifically his involvement in the decision to attack Pearl Harbor. Under pressure from the U.S. president, General Douglas MacArthur orders General Fellers to investigate the emperor’s culpability and have a closed case within ten days from start to finish.

General Fellers, who has an affinity for Japan, accepts the challenge. He must question the accused Class A war criminals such as Wartime Prime Minister Hideki Tojo, Former Prime Minister Konoe, and Koichi Kido. And if for no other reason but to aggravate General Fellers, he must also confront prejudice from a resentful Japanese populace and vengeful American troops.

Complicating this task is General Richter (played by Colin Moy) who is bent on derailing Feller’s investigation in order to justify revenge upon the emperor. While Richter conveys American’s demand for revenge, Feller argues, “Revenge is not justice.”

To conduct his investigation, Fellers is assigned a staff and further assisted by Takahashi (played by Haneda Masayoshi) who is assigned to him as both interpreter and driver. Takahashi is initially treated with cold indifference by Fellers who is both under the strain of his investigation and his preoccupation with finding his pre-war love interest, Aya Shimada (played by Eriko Hatsune). Through General Richter’s plot to stop Fellers, it is revealed General Fellers deliberately steered bombing missions away from Aya’s home. General Richter uses this against Fellers to knock him off the investigation of the emperor.

Post-war tensions, authentic sets, period costume, and an all star international cast make Emperor an engrossing drama for what it is. “We’ve won the war. Now what?” Is the sentiment of the first act. It’s not so obvious what the nations should do in the wake of Japan’s surrender.

The film is an act of nostalgia, a study of power, and a romantic memoir told in muted colors, shades, and tones. Fox sounds like a young Henry Fonda, without trying to do a faithful imitation; Jones captures MacArthur’s certainty, swagger, and authority. Fellers and Aya’s story is told through a series of layered flashbacks, while his investigation into Hirohito’s culpability is a movement forward that’s marked by interviews with prominent individuals in Japan’s military, political, and imperial branches. -Louis Black

Movies based on true stories usually have to amplify some of the history to offer entertaining drama. Look no further than Steven Speilberg’s Lincoln for an example (there are countless others). This is not something that Emperor needed to worry about. The attack on Pearl Harbor and other barbarous crimes committed against humanity are the backdrop for this post-war film. Thanks to its solemn tone, Emperor captures a deeper sense of its historical relevance — not self-aggrandizing in the least, and oh-so thoughtful.

Emperor is an unapologetic history lesson.2 It dramatizes one of the most interesting choices of the 20th century: whether or not to take the easy route and condemn Emperor Hirohito for war crimes against America (and beyond). Everyone and their dog would condemn Emperor Hirohito — purely out of bitterness towards Japan for their acts of war — and in so doing expose Japan to the forces of communism and possibly much worse.

There were few Americans that wanted to understand the Japanese better than General Fellers, as portrayed in Emperor. Fellers sensibly pursues wisdom in his difficult investigation. Watching his journey to make the difficult choice of clearing or condemning the emperor is stirring and pleasantly heartfelt.

Although the entertainment-for-entertainment’s-sake value is low, what there is here to entertain you through this review of war history is above par. Tommy Lee Jones has all the old fashioned American swagger that we want mustered to flesh out one of the more intriguing American men of war, General Douglas MacArthur. Matthew Fox has to tread a tightrope to portray the American patriot that wants justice, mercy, and innocence protected. Americans in Emperor are crying out for blood, but General Fellers wants to offer his hand in peace.

Speaking of the Japanese, the Japanese actors’ performances in Emperor are some of the most convincing I’ve seen in drama. The visual effects, locations, and sets are first rate, leaving little to the imagination for post-war Japan’s debilitated state from the bombings.

Production design by Grant Major and costumes by Ngila Dickson are impressively detailed on what was likely a limited budget by Hollywood standards. Shot in New Zealand, the film benefits in visual command from Stuart Dryburgh’s cinematography – by turns ashen or awash in tones of burnished darkness for 1945 and with a softer look for the mid-‘30s scenes. -David Rooney

Although David largely dislikes the film, I agree with his descriptive compliments for the effectiveness of Emperor’s cinematography. The studio hasn’t officially revealed the film’s budget, but if it was relatively small then I would be all the more impressed with the film’s production values. Rotten Tomatoes (and largely the sentiment of general audiences) says the movie is jet-puffed with cliché romance. I beg to differ: the romance isn’t cliché, it is poorly executed. It’s not inspired, and when it works it still doesn’t live up to the themes of Emperor. Rotten Tomatoes says:

Despite a typically strong performance from Tommy Lee Jones, Emperor does little with its fascinating historical palate, and is instead bogged down in a clichéd romantic subplot.

I do agree that Emperor’s shortcoming is the vague and mostly fictitious romance. Fellers’ and Shimada’s romance viewed solely through flashbacks turns tragic (and predictable) on itself, and does little to support the greater plot from a technical point of view. The romance is clearly intended to demonstrate why Fellers showed compassion to the Japanese. It also makes Fellers a more dynamic character, more accessible to the audience….

And yet the romance is sadly inferior to the greater whole of the film. Mattew Fox doesn’t have chemistry with actress Eriko Hatsune. Though Eriko’s performance is impressive when she shows concern for the affairs of Japanese citizens, I’m not convinced that her character, Aya Shimada, relates to Bonner Fellers or is ever more than flattered by Fellers’ persistence. They are an uncomfortable couple trying to work something out that mostly looks like two actors walking on eggshells together.

And as asserted by Kevin Jagernauth:

While the script from David Klass and Vera Blasi attempts to honor the dichotomy and complexity of Japanese culture—how guiding principles influence both how things appear, and how they really are—it’s too bad the one Japanese character who could theoretically best represent that is so underserved. Eriko Hatsuno plays Aya, a young woman that Bonner met at college, who described herself to him as being out of step with her family for being too outspoken. Unfortunately, we never get to see that quality as Aya gets little dialogue, and spends most of the picture blushing, not speaking to Bonner and theatrically reacting and swooning to the various bumps in the road their relationship weathers. Oddly, the film works in spite of the huge chunk of the film squandered on the romantic subplot. After the flashbacks with Aya subside, we see Fellers cope with the war and the havoc it has wrought. I was convinced that General Fellers loved the woman of his flashbacks, and this supports Fellers’ show of maturity. When he faces the conclusions of his investigation of Emperor Hirohito, he does so with irreproachable sensitivity to justice and mercy simultaneously.

This movie is something that everyone should see at least once. I am glad it doesn’t go overboard with Spielberg-like melodrama, witicisms, or grandeur. There’s something in its favor: letting the story be planted firmly in sober-minded review of relevant history of global proportions without extraneous sensationalism. Emperor ploughs through points of political contention with wisdom and commits to old fashioned justice.

The film bites off much more than it can chew, raising far more issues and personalities than it can successfully weave into one overall narrative. Too much occurs in the past, the number of characters and amount of war history bog things down, and the events in the present are no less crowded and confused. Emperor, however, is so sophisticated in its ambitions, mature in its narrative, and expert in its execution that the film’s failures are more honorable than fatal. -Louis Black

Emperor is a good movie — maybe not a great one, brought down by muddying the message and history with fictitious subplots that struggle to be engaging. The history is treated respectfully. In no time at all you connect with this portrayal, caught up in the drama of the moment. Sometimes you might want more out of the dialogue or the performances, but on the whole it’s sincere and authentic.