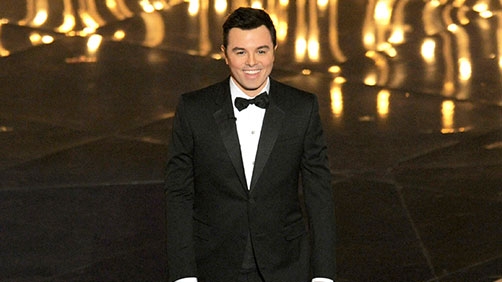 When the ratings came in, it was clear they’d made the right choice: Ratings were the highest in years and there was a 20% bump in the key demographic. Go Seth!

But another demographic was unhappy. Not just unhappy, but angry. A close friend sent me a blistering New Yorker column by Amy Davidson referring to MacFarlane’s “ugly, sexist, racist Oscars.”

Whoa! Did she see the same Oscars I did? Because the presentation I saw was a veritable paean to women. Women were showcased in a way I can’t recall men having been. What’s more, gay men were showcased too and it’s long been de rigeur in Hollywood to pretend there really aren’t queers in Tinsel Town. Admit it — seeing the Gay Men’s Chorus of Los Angeles on the Oscar stage was pretty fabulous.

Yes, I’m still beating this dead horse. But that’s because I find it fascinating. I may get myself in trouble here, but I am firmly in the group of people feminists would hate — the group that thinks feminism has done more harm to women than pretty much anything else around right now. Feminism has been truly degrading to women and put them in positions they never should have been in. I don’t say this because I hate women, quite the contrary. I was raised on old fashioned principles of respect for women. I’m only saying this so you know where I’m coming from.

On The Wrap this past Friday, I mentioned that I didn’t find MacFarlane sexist at all and found his satirical pointing out of women’s degradation kind of refreshing, even it if was crass, and even if I would have found a more classy way to do so if I had chosen to address it. Still, why is it sexist to draw attention to the degradation of women who feel they must take their clothes off to get any attention? How is that feminism working out for ya?

And though I don’t agree at all with the position Victoria Brownworth takes in this article as a feminist, I am glad that at least one feminist in this world did not see MacFarlane, someone who seems like he should be hailed as a champion of modern “equality”, as sexist.

And I find it interesting that the feminists other than Victoria have, for the most part, been brutal to someone who by all accounts is an ally. What’s wrong with them? Here, let Victoria make my point:

The awards were slated as a tribute to music in the movies, which led to a series of song-and-dance routines to open, including a satirical parody sung by MacFarlane called, “I Saw Your Boobs.”

The song referenced what many Oscar-winning actresses are forced to do for the movies: show their breasts, regardless of the circumstances of their roles. Among the actresses mentioned were Jodie Foster in The Accused and Hilary Swank in Boys Don’t Cry, two films in which the characters are brutally raped.

Even though the women shown during the song were in on the joke (their reaction shots were obviously pre-recorded) this song became the focal point of the day-after attacks on MacFarlane. Missing, we thought, the entire point of the song: that in Hollywood, women — even when playing victims of violent crime — are reduced to the sum of their body parts, not the sum of their movie parts. But a man singing about “boobs” just had to be bad and sexist and wrong. There couldn’t have been a satirical point being made.

Is MacFarlane the villain for calling out the reality or are Hollywood — and American audiences — at fault for demanding physical perfection from female actors while men can look however they want?

Alright, that’s all I have to say. That’s it, I promise. Everything else today will be fun and non-controversial. I can’t wait to see what kind of trouble I get into over this…