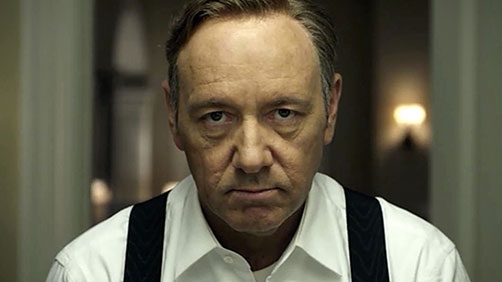 We’ve all been there — a Sunday afternoon marathoning Lost or some other show that’s been aired for years, yet we never got around to watching it.

Now think about when a new show premieres. Most of us whip out our phones and share the excitement along with thousands of other viewers watching on social media. Live events tend to generate a mass amount of buzz because we’re all watching together at the same time.

House of Cards had the highest percentage of overall buzz occur during the first week following the premiere. That buzz also decreased at a faster rate than any of the other shows.

I said this from the beginning. I’m hugely in favor of new media, new distribution models, companies like Netflix stepping in and producing shows for delivery via the internet, on demand availability right away. But I was thinking more along the lines of still releasing one show per week on a schedule. I just didn’t want it to be limited to the broadcast medium, but to be available to watch on Netflix right away. And having gone through all of House of Cards watching the reaction to it, analyzing the reaction to it, and reading smart analysis like this, I am still of the opinion that one show per week would be much better for the show(s) and for the buzz.

Without getting overly analytical or crazy what it does is it keeps all of us who watch the show on the same page. And when we see each other at work or chat online we say to each other, “Hey, did you see the latest episode of such and such?” “Yeah, man, that was crazy how so and so did…” and so it goes. With House of Cards what I experienced was more like, “Hey man, did you see episode 3 of House of Cards?” “Are you kidding? I binge watched all thirteen episodes in one night and didn’t get any work done the next day and now we can’t talk about it until you finish the series.” It was pretty annoying.

So in summary, I’m in favor of the new model, but I don’t think we should throw out the baby with the bath water.