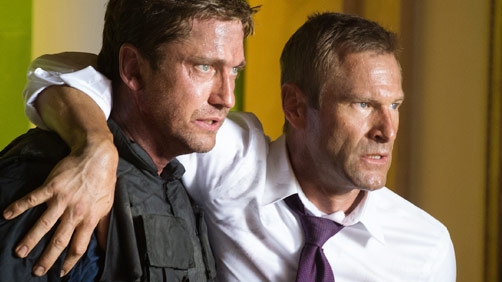 Gerard Butler is all-American presidential security guard Mike Banning. In this epic terrorist attack action flick, he uses all his dedication, manhood,1 and skill to save the president of the United States and America itself. Dude…

The trailers for Olympus Has Fallen say it all: this is a crazy-dangerous movie with loads of ambition to deliver the greatest action film of 2013 to date.

On a ride from Camp David on a bitter winter’s night, tragedy strikes the U.S. president’s limo convoy on an icy bridge. Presidential security guard, Mike Banning (played by Gerard Butler), pulls President Benjamin Asher (played by Aaron Eckhart) from his limousine right before it falls to the ice below. Mike and Benjamin were unable to rescue First Lady Margaret Asher (played by Ashley Judd), injured and unconscious in the limo at the time it fell.

18 months later, Mike Banning has recouped from the mishap and is eager to be reinstated on the president’s detail. President Asher does not allow this as Banning brings up painful memories of the night Margaret died.

The day is July 5th when the White House — Secret Service Code “Olympus” — is bombarded by a Korean terrorist mastermind and President Asher is taken hostage. Quickly responding to the guerrilla attack on the White House lawn, Mike Banning fights his way inside to offer backup for security. But the problem quickly worsens and Mike finds the Koreans have successfully taken the White House in their invasion. Finding himself trapped inside, Mike assists the U.S. national security team scrambling to rescue President Asher and the president’s son, Conner (played by Finley Jacobsen) within the White House’s underground.

Speaker of the House, Alan Trumbull (a.k.a. Morgan Freeman), is declared acting President. Alan and the U.S. national security team are forced to rely on Banning’s inside knowledge to help retake the White House, save President Asher, and avert a nuclear crisis.

It’s not an especially creative story. From start to finish, it’s a lost episode of the TV series 24. Or in another way to look at it, Olympus Has Fallen is a story that takes less than six hours to accomplish from start to finish reduced to a 2-hour film view time. It has all the intensity of 24 in a short span. This is director Antoine Fuqua’s talent. He spins the action and drama with enough skill to maintain energy throughout a simple story that would have otherwise been just another action TV show. Action fans will be satisfied.

Gerard Butler delivers a strong performance as Mike Banning. He’s the uncomplicated hero ready and able to protect and defend. This brings attention to the absurdity of the situation: that so many terrorists blow away all of our White House defenses. The body count is out the wazoo. Then, Mike starts cutting down dozens of these Korean baddies — the same brutes that just minutes before annihilated so many others just like Mike Banning. So, though Mike is a fun action hero, he’s got incredible odds stacked against him and does everything right when no one else could. It’s amazing to watch Gerard pull off such an ambitious role.

My attention was also drawn to the locations/sets of the film. There were a number of shots from the streets of D.C., the White House lawn, and the rooftop of the White House. All in all, these looked convincing. If I didn’t know better, I would say that much of the film was shot using the real White House. First of all, not-so-much a con as an annoyance, there is a plot contrivance near the beginning of the film. As the president’s limo and security detail vehicles are crossing the bridge in the dark of night, the vehicle at the head of the caravan is struck by an unseen force. By the time the president’s wife sinks to her icy grave below the bridge, I was dying to know what had hit that SUV in the first place. The film offers no answer to this mystery. And this is not the only time this happens — many times we are faced with plot contrivances involving the Korean bad guys throughout the film.

I noticed throughout the film that much of the visual effects were less than spectacular. Aircraft and helicopters were noticeably made with CG. Explosions and gaping wholes in the White House looked painted with Photoshop. National security radar and cams showing live arial views of the action looked like something from a souped-up computer game. These less than realistic details are easy to overlook but give the whole film a cheap look.

Besides the subtleties, two foreground elements stood out in annoying ways: the soundtrack and the main villain.

The villain, Kang (played by Rick Yune) is a well-suited, tall Korean fellow. He’s always mannerly yet emotionally disconnected and monotone. Kang is a two-bit villain that accomplishes a whole lot with his band of terrorists that are all ready to fight to the death. I say he is a two-bit villain because it’s remarkable how quickly he looses all of his power to Mike Banning at the end of the film. It would seem Kang had planned for everything — the politicians, security guards, military, arial responses, computer security — except for the unstoppable force of Mike Banning. I took Kang at the beginning to be a villain that would do anything but die for his cause because he believed his cause was worth living for. At the end, he deviates, and does some fairly stupid things for a terrorist mastermind. His self-preservation suddenly disappears.

Anyway, there is the other foreground element that was odd: the heavy-handed loud orchestral soundtrack. Ordinarily I enjoy patriotic action themes, but this one doesn’t offer anything great. It’s a simple rip-off of the Pearl Harbor soundtrack by Hans Zimmer. It’s meant to derive generic patriotic vibes and not much else. There’s no dynamic to the music as a whole, yet it takes the stage several times with nothing to offer but instrumental noise. Olympus Has Fallen is an exciting action ride through the charred walls of the White House. Bathed in blood and erratic behavior, it’s difficult to know what’s going to happen next. All of the nail-biting explosions and knife fights come to a screeching halt with an anti-climatic finish.

Well, if it’s all about the journey, then Olympus Has Fallen will please action junkies, and it tugs on the heartstrings enough to keep most all Americans enthralled with the struggle to save America from a nuclear holocaust.