Star Studded Ratings by the Numbers 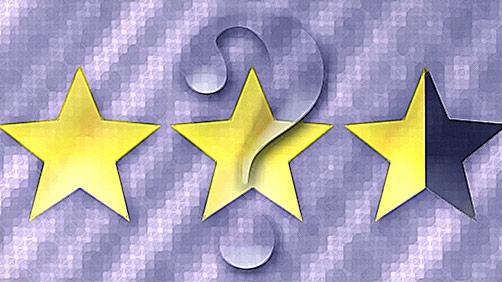 MovieByte has a five star rating system: 0.5 to 5.0. This frees our reviews to be fairly specific about the value of a film using 2.5 stars for a median in terms of entertainment value and quality. However, there are so few good explanations of star rating systems on the Internet. What does a “2.0” or “4.5” mean? Why do we use a 5 star scale instead of a 4 or 10 star scale?

We at MovieByte leave it up to our individual reviewers to determine how to gauge a film. Yet it is people’s natural inclination to give most movies a 1 or 5, which is something all star rating systems suffer from. Even when reviewers do their best to be “fair” their biases lean especially towards high or low scores. I’ve read reviews that only had bad things to point out about a film, then still give it a high rating. Uh, really?

In striving to maintain a consistent approach in a rating system, I’ve formulated the following guiding descriptions. I’m sharing this with you, but really it is just my personal cheat sheet for when I want to rate movies. I’m not suggesting you adopt this method, but if you have felt, like me, that it’s all so arbitrary without some standard to go by, then this might be useful to you. Whatever you adopt, please don’t judge people by their star ratings, and don’t measure their reviews by my system. This is for your own cogitation.

0.5 Star means “Scary Beyond All Reason”

Atrocious… The film has you wishing to gouge your eyes out with a spork, and either go all ninja warrior on the TV or try to zap the cinema screen with lazer vision. Everything about this movie is so bad that it isn’t even remotely good at being terrible. You really wish you had done something more worthwhile rather than watch the film, like sorting orphan socks.

If someone gave you this movie, you would scrub it with a bar of soap and hot water, throw it into a fiery furnace, then feed it to a ravenous liger. And above all, you would avoid the risk that other human beings could be exposed to it. You are keenly aware there is no known antidote for its traces of arsenic-laced toxins. 1

Still atrocious, but has at least one thing that proved satisfactory, like one decent adrenaline rush in an otherwise pitiful thriller, or one good laugh in an otherwise humorless comedy. That positive trait could be any one thing …a clever plot point… just something.

But you would never ever watch the film again in its entirety. You might look up that one decent part as a clip on YouTube if you had nothing else better to do under the sun.

It’s bad to the point of “sad,” but you think that watching this movie once was a tolerable bit of amusement on a slow weekend. Since your cable was down and you were too lazy to drive to the Redbox… Or, you felt the need to expose yourself to something pathetic to refresh your appreciation for good movies.

Although it was a sad excuse for entertainment, you reflected on how easily a film can go awry. You should have done something else better your time, though, and you realize this. You plan to avoid the film in the future, especially on the next slow weekend.

2 Stars means “Close, But Not Cutting It”

It should’ve been better, but you recognize it was “almost there.” It has some good parts that are spoiled by bad parts, or it tracks at a consistent level of, “If only it were in the hands of capable filmmakers…” You don’t especially loathe the film, but you don’t think you will watch it again unless you’re pressured to by an over-eager and foolhardy friend.

You might be a little embarrassed to admit to your peers you found anything about the film likeable because, let’s be honest, the movie is sort of pitiful.

Meh. It’s not noticeably disappointing or praiseworthy. It simply makes par for the course. You feel that you didn’t waste the last 100+ minutes or the price of a rental, yet you wouldn’t do more than press a button on your remote and stumble upon it to watch it again. It has equal likable and unlikable parts.

When some friend mentions it in passing, you might need to Google it to be reminded of what it’s about. If someone gifts this movie to you, you’ll likely give it away or sell it on eBay — whichever is more convenient after it’s collected some dust in a bin you usually overlook in your home entertainment library. Because, frankly, it’s mediocre.

It has some parts that make it more than fair-to-middling — even somewhat enjoyable — but it either does not go from good to great in any one part, or if it does, it also has major letdowns that shoot it in the proverbial foot. Maybe the ending is terrible, or you dislike the starring actor(s)... You don’t make plans to see this film again until you know for fact you have already watched and re-watched everything with a score higher than 3 stars in the last 30 days.

You would only recommend this “Okay” bit of amusement to someone that’s an enthusiast of its genre, and you would also give them the heads up to not raise their expectations high. You don’t intend to buy it, but if you’re given the movie you won’t bother selling it unless you need more room or are desperate for some cash in your spending fund.

This movie is something everyone should see at least once, and you are warm to watching it twice. You aren’t a big fan, so you might see it the second time a year from now (while you have the flu if not some other idle moment).

You know your friends would like it, but you’re not going to host a movie night with them at your place with this movie as the highlight of the night’s entertainment. There’s just some things about it that, well… You just aren’t sure that it will meet your friend’s entertainment standards.

It’s noticeably enjoyable despite several uninteresting parts, lame characters, or subpar filmmaking standards — plot holes, etc. You’ll never forget the enjoyment you have seeing it, yet you can’t completely see past a few of the movie’s shortcomings. So, if the movie happens to be available for a 50% discount, maybe you would buy it on an impulse.

You will watch this film many times, and you know it. Even though it most assuredly has its faults, the whole of the film is good and you usually see past the weaknesses. After all, it has some very likable performances, or some quotable bits of dialogue you want to memorize. Oh, of course the visual effects are subpar, that one plot point is cliché, or the soundtrack doesn’t cut the mustered, but those are trivial details in this movie’s case.

You will recommend it to friends unless you are aware they don’t enjoy the genre or the stars in the leads. You will probably buy this movie, especially if there is any sort of sale for it or bonus features with it.

Wow. You had a hard time identifying any fault with this film, and you know deep in your heart that you will watch this film countless times. At some point you identified at least one thing about it that you simply don’t like, and never will appreciate — like that one awkward scene where they kiss but they shouldn’t have. Therefore, you don’t believe it deserves an outright 5 — perfect — star rating.

You will recommend this movie to most everone, even if you don’t know their tastes or suspect they have a reason to dislike it. They will likely come to appreciate it once they’ve see it, right? Surely. You are ready to buy this movie at MSRP, and maybe buy it on a pre-order.

Say, that movie was so good you were ready to watch it again right after you saw it the first time. Yes, you would buy another ticket and walk right back in the theater then and there.

You will watch this movie for the rest of your born days and not grow tired of it. With each viewing you uncover something new, or see something in a different light. The key moments still thrill you even though you know them forwards and backwords. This movie has nothing in it that is less than “good” as far as you are concerned. And, to be honest, if there’s anything that is less than “perfect,” this movie generously compensates for it with something else that is utterly brilliant or heart-pounding.

You’ve recommended this movie to someone before you even realized it — maybe even to a total stranger. You are not going to buy a standard release, because you will seek out the “ultimate edition” in a fancy box with the extended cut and the special access code to the online forum with the director. And as for price, “What price?” you ask. It’s worth the weight of the Blu-ray disc in 24k gold.

Since the lowest scores are probably the hardest to come to grips with, here’s some more input.

Films that score 0.5 on up to 1.5 are the ones that would make you walk out of the theater demanding a refund. If this is on TV, you’re erasing it, or changing the channel. And if you cannot find the remote, then you are unplugging the TV.

2 star films are just not bad enough to make you walk out of the moviehouse, but you still feel jipped. You might feel this way with 2.5 star films but to a lesser degree. If you are watching a 2 to 3 star film and it’s just not working for you in the moment, then you will only continue watching it if you’re with your special someone that wants to finish it.

3 stars or higher you don’t think it’s a waste of your time and money. In fact, you might feel it was a worthy investment of your time if it’s close to 4.5 star worthy.

Now, by no means are these subjective descriptions set in stone. A movie that seems to meet one of these descriptions to a T might still earn more star power for an unusual reason, like being the first of its kind to introduce an original plot concept, or it introduces some new talented actor with a career you will not want to miss. On the other hand, a movie that looks like its X stars might get a substraction if it has something that offends you, even though the film seems good otherwise (“If it were not for that one ____________”).

In any case, you should not pan a movie for just one or two negative qualities. Also, you should not adjust your score to “balance” out other reviewers’ irrational/extreme scores. That completely negates a movie’s average rating, which is a helpful metric.

Above all, let’s attempt to put thought into our star ratings. For instance, no historical drama will be 100% historically accurate, so why should it be solely judged on historical accuracy or authenticity? It’s questionable what some of us will rate a movie/show/game/product when our head isn’t in the game. If you don’t understand my reasoning, then please don’t rate films or anything for that matter. Just keep watching entertainment that meets your narrow-minded vantage point and keep your opinions to yourself, thank you.