Beyond Star Trek Into Darkness 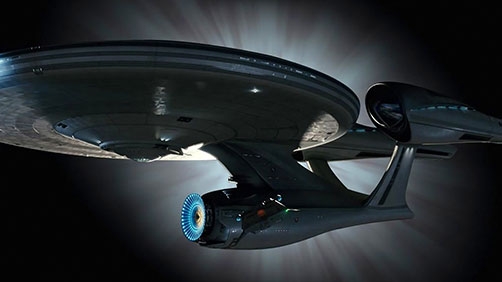 As readers of this site know, Star Trek Into Darkness opened domestically and internationally late Spring and has earned over $443 million dollars. This is a success for Paramount, albeit a modest one. It’s not a flop, by any measure… but it’s not a home run, either. It’s a solid double or triple, but Paramount (like all studios do with summer blockbusters) was swinging for the fences. So, what’s next? Well, to quote Donald Rumsfeld, there are some “known knowns” and “known unknowns.” Let’s cover what we know, and spend some time theorizing what comes next.

Yeah, seeing how this film is a better film than the 2009 film by a long way, it’s a doggone shame that this film couldn’t have been a bigger hit.

2016 will mark the 50th anniversary of the debut of Star Trek, and releasing a new Star Trek film that year is a no-brainer – Like Skyfall showed last year, there’s a lot of benefit that can be gained from releasing a film that ties into an anniversary year. Will it happen? Paramount has not yet officially stated that there will be a third Star Trek film, which is surprising – they announced a sequel to Star Trek shortly after that film opened. However, co-writer Damon Lindelof has stated in interviews the film is going ahead.

Right, despite the studio having not announced the third installment yet, we’re all pretty sure it’s going ahead…

How will Paramount respond to the modest success of Star Trek Into Darkness? Possibly by reducing the budget of the third film. This could be a good thing, in that a reduced budget could increase focus on telling a tight story and on character moments. A Star Trek sequel with a reduced budget wouldn’t be anything new – Paramount cut the budget for the first Trek sequel, and in return we got The Wrath of Khan. Less money doesn’t mean reduced quality – sometimes budgetary constraints can produce creative solutions and better ideas.

Exactly right. I’ve been know to say exactly this sort of thing a lot. Bigger budget hardly ever equals better film. If memory serves, The Wrath of Khan had the lowest budget of any Trek film and it’s still the best. I think the analysis of budgetary constraints fostering a sense of creativity to get the job done is exactly right. If forces creativity. Now, obviously you can’t make a good film with no budget at all, so it still has to be reasonable, but a budget reduction doesn’t scare me at all.

Star Trek started on television, and many fans think that Star Trek is better suited to episodic TV than to films (former Star Trek writer and show runner Ronald D. Moore has also said as much in interviews). Writer/producer Bryan Fuller, who is currently working on the series Hannibal, has repeatedly said he would love to helm a new Star Trek series.

Will it happen? Maybe, but don’t count on it.

Thanks to a large splitting up of Viacom properties in 2005, two different companies effectively own the Star Trek franchise: CBS Studios now owns Star Trek as a television property and Paramount Pictures owns the film properties.

That is a shame, really, because I think a TV series would be a good thing for Star Trek. And maybe we will get one, but as Joseph said, don’t count on it.