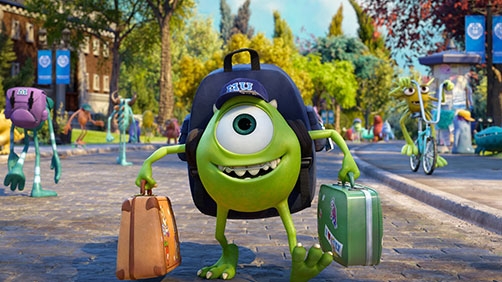 Two weeks in a row Pixar dominates the box office. Clearly, MU is a big winner here. But Sandra Bullock and Melissa McCarthy seem to be setting fire to the White House, and bringing the heat so to speak. In fact, it seems Zombies are attacking the presidential residence as well.

A strong second weekend for Monsters University, particularly with foreign totals. I’d say everyone liked it. And I mean, it’s a solid film and all, but I have to imagine this really good film, following up on the beloved studio’s previous two lackluster installments is really making things boom at the box office. People are just glad to think they have their beloved Pixar back I think. We still don’t know how much Pixar spent on this film, but I have to imagine $300 Million worldwide is pretty good for only the second weekend.

So, I’m planning to see either this, or White House Down tonight, I’m leaning toward this based on the general response to each film. I have been looking forward to it even though I’m kind of expecting to be disappointed. But the people are sure liking it! According to RottenTomatoes, the critics aren’t liking it quite as well at 62%, but that’s still considered “fresh”. And often times a mixed critical reception is not particularly a bad thing. In any event, this is a fairly strong opening and I’m looking forward to seeing if this film can live up to it for me.

Well, that’s not doing too poorly, and it’s actually a decent enough film. Seems to me is has a wee little bit to go to turn some good profit. Larame Legel over at Film.com has mentioned before that a film really needs to make about 2.5 times its budget to really be worth it to the studios. Seems a tad high to me and probably depends on the film, but it’s not a whole lot over it’s budget right now. Still, a sequel has been announced in development.

Is it too early to call this a bomb? I don’t think it is. At this rate, it’s never going to make it. Kind of a bummer because I was looking forward to it at least on some level, knowing that it probably would be a bit ludicrous, but still expecting it to be a little bit fun. Now I’m skeptical, although interestingly, users are rating it decently on Rotten Tomatoes, but the critics don’t really like it.

Well this is obviously a big win, which is disappointing in my book (I know most of you don’t agree, obviously). It was not a good film and these sorts of crazy totals just encourage more of the same lackluster filmmaking. Blurgh.

Well, whatever. Who am I to stand in the way of the lackluster films that the people want?

Oy, what is this still doing on the charts. Ugh.

So it’s made 2 times it’s production budget now. Assuming Laramy’s figures are a tad high I’m going to guess this is not a terrible run.

There can be no doubt that this terrible film is a huge money maker and there will almost certainly be another one.

Of note, surprisingly, Star Trek Into Darkness held it’s #9 spot on the chart. It has now made $438.1 Million Worldwide: a win by any reckoning and more than the previous Star Trek film made. Somewhat alarmingly though, the domestic total is down. The gains come from the foreign audience. It’s very strange considering Star Trek has always been a mostly domestic phenomenon. But I’m glad either way because it does mean a third Star Trek reboot universe film is likely to get the greenlight.