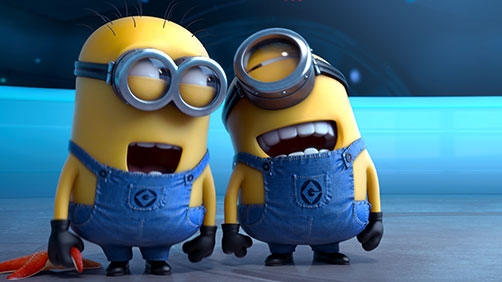 In one of his most stunning evil genius feats yet, super-villain Gru has used his ingenuity to make off with the cash box containing the large majority of the box office profits, foiling the justice seeking Lone Ranger who wasn’t left with much of a cash reward. I think old Tonto’s “Spirit Walker” may not be as invincible as Tonto thought after all.

I think we can safely call this a major victory, and I think we can predict that Despicable Me 3 is right around the corner. I certainly enjoyed this film far better than the first film, though I’m still troubled by the entire concept of the villain being the good guy. That goes against my personal beliefs. But the focus on this film was less of that and more on Gru actually being a hero. And I certainly laughed a lot more for this one than for the first one. Oh, there was still plenty of face-palm moments for me of slapstick humor, but I felt the balance was better achieved for this film. Overall I’m going with the thought that this film is worth seeing. And in some ways, it’s not surprising that it’s doing so well. It is a wee bit surprising to me to see what it’s winning over though…

Talk about your box office flop, this is one if I’ve ever seen one. And the worst part is, it’s actually quite a bit better film than the critics are saying, and certainly better than I was expecting. To hear the critics, and other talking heads and writers, you would have thought that native Americans were given a pretty bad name, and from all that I was expecting some overt racism, but upon watching the film, I detected none of that. Johnny Depp and his character, Tonto, did not represent the average native American, but rather, an emotionally damaged and mentally unstable individual. I thought the native Americans were otherwise well represented. I don’t get what the problem is here. And I otherwise found the film to be engaging even if some of the setups never got any good or fulfilling payoffs. Overall, I’m thinking that I will be rating the film 3.5 out of 5 stars, a far cry from the 25% accumulated critic rating over on Rotten Tomatoes.

What can account for the flop though? It’s just a guess, but my analysis at this point is that Pirates of the Caribbean franchise fatigue is carrying over into this film as well. Johnny Depp had a good run, but I think people are tiring of the idea of him. If I were him and the filmmakers that work with him, I would take a couple-year-long break I think.

This film had a decent enough story, though some of the execution suffered for a desire to over comedify (is that a word?) certain aspects. I don’t mind comedy, but you have to achieve balance. If you want to watch a Sandra Bullock film that struck the right balance between Comedy and drama, try While You Were Sleeping. Additionally, while I am not in general opposed to a real-live portrayal of language, and a foul mouth Boston police officer is probably just a real-life portrayal, I felt a little beat over the head with the language. Perhaps they could have toned it down just a bit. My personal rating of the film is 3.5 of 5 Stars.

In any event, on a budget of $43 Million, $92.5 Million worldwide total is creeping up on winning if you ask me.

All the way from number 1 for two weeks, to number 4, but, this film jumped up $100 Million over the weekend. Most of that is in foreign money, and the charts are all geared domestically, and domestically this film is number 4. I don’t know what the budget for this film was, Pixar is not releasing the numbers for some reason, but I have to imagine that it was not more than $200 Million or so, which is around what Pixar has been spending on their animated films lately. So this is obviously in winning territory.

Another big win I think.There will obviously be more from this film universe in the near future.

Good film in my opinion, but no one else thinks so apparently because this looks to be a major box office flop.

The box office almost always breaks my heart every week in some way. White House Down is a far better film than this, but it’s a flop. This film is garbage, but it’s made a killing. I just don’t get it.

What on earth is this even? I don’t even… Wha?