Hello, Zeke: A Brief Word About the Evolution of the Undead 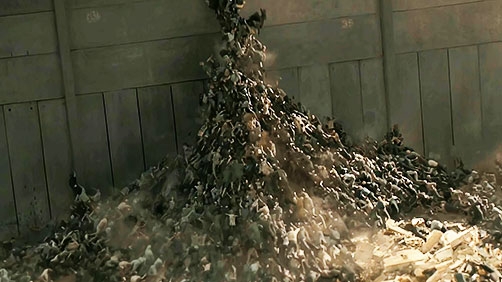 Following my review of World War Z, a discussion broke out in the comments section regarding the merits (and demerits) of the film’s approach to the zombiepocalypse. One of the most interesting things this discussion yielded was the assertion that WWZ is “barely passable” as a zombie film. Why? Mainly because there is no such thing as a fast-moving zombie. The movie shows us infected humans - crushing armies, leveling cities, chasing Brad Pitt hither and thither – but these feral chompers cannot be designated “zombies”. Real zombies don’t move like that.

To tell the truth, I’d never heard this objection before, but half an hour of internet grave-digging told me it’s not an uncommon one. Those who raise it generally point to George Romero’s seminal Night of the Living Dead (1968) as the progenitor of the classic zombie formula  – the reanimated corpse with a hunger for human flesh and a slow but relentless walk. Movies like WWZ, the argument goes, stray too far from this formula and are therefore not canon. I understand this position, and to a certain extent, I sympathize with it. But let’s be honest: even George Romero brought something new to the table. J.C. Macek, writing about the legacy of the living dead, points out that prior to 1968, zombie films “usually featured human beings enslaved by Voodoo and controlled by some kind of mad scientist with a diabolical b-movie plan… to 1968 audiences [Romero’s take on zombies] was all brand spanking new!”

Romero – the zombie movie maverick – was clearly no “purist” himself; else he would not have taken such radical steps away from a formula that has ties to the prestigious likes of H.P. Lovecraft and Mary Shelley, and before these, to ancient European folklore. Romero wasn’t afraid to give fresh spin to an old genre. It shouldn’t bother us when others try to do the same.

In her article on the evolution of zombies in pop culture, Dana Fredsti observes,

The zombie genre has seen endless variation over the years. We can and should argue that some variations are better than others (shark fighting zombies, seriously?); but first, we must acknowledge that these variations are, in fact, part of the zombie canon and its history – and will remain so, whether we like it or not. Only then can we move on to debate the merits of each. This is how we ought to think about “fast zombies” - not by denying their zombiehood, but by weighing the merits of such a change within the context of the film and within the context of the canon. WWZ is not, after all, the first film to present us with such a creature. Zack Snyder’s 2004 Dawn of the Dead remake features a horde of zombies fully capable of running full-tilt when they want to. Those infected in Danny Boyle’s 28 Days Later (2002) move with similar blood-thirsty vigor. WWZ‘s beasties may be the fastest and most swarm-like of the lot, but they’re certainly not the first to scrap clumsy footwork in favor of high-speed pursuit.

You may tell me you don’t like fast zombies; that you prefer your dead to be the walking dead, the shambling flesh-eaters of Romerodom. Now we’re getting somewhere, see. We’re both talking about the same thing. We’re not debating mere infected humans vs. zombies; we’re debating fast zombies vs. slow zombies.

This, we can work with.