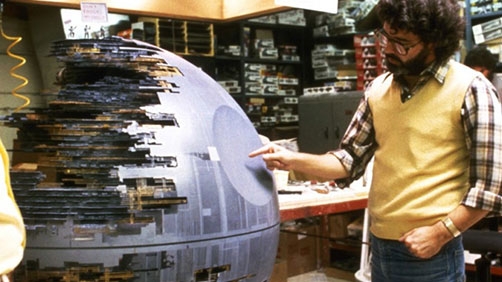 ” ‘Star Trek’ softened up the entertainment arena so that ‘Star Wars’ could come along and stand on its shoulders,” Lucas said in an interview featured on the DVD. “There was an effective group of people in the beginning who accepted it.. that it wasn’t that far out. For the studios it was way far out, [they said] ‘What is this?’, but there was a fanbase out there—primarily the ‘Star Trek’ fanbase—who understood sci-fi, understood visual sci-fi, and was ready for something like this ‘Star Wars’ to be in the feature arena.”

And as JoBlo rightly acknowledges, it was actually the success of “Star Wars” that made it possible for “Star Trek” to make the leap to movies. Circle of sci-fi geek life, right?

As a fan of both, I completely agree and endorse all this. Let’s stop fighting and just get along. Both franchises have profited from each other’s successes. Now they are even going to share a director. We should all just get along!