Neeson Willing to Star in ‘Taken 3’ For A Large Sum 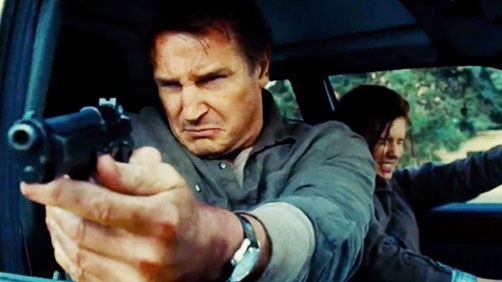 Here’s one from last week I meant to post and never got around to.

Shortly before the release of Taken 2, star Liam Neeson sounded deeply skeptical about the prospect of a Taken 3. “I don’t think it’s going to happen,” he shrugged. “I can’t see a possible scenario where audiences wouldn’t go, ‘Oh, come on…! She’s taken again?’” But for an eight-figure salary, he’s apparently willing to keep an open mind.

Neeson is in final negotiations to star in the next Taken movie, which is being scripted once again by Luc Besson and Robert Mark Kamen.

For Taken 3, Deadline reports that Neeson will earn something in the vicinity of $20 million. To put things in perspective, that’s just $5 million less than the entire production budget of the first film. Still, the franchise’s continuing popularity will probably make that high price tag worth it. The first film grossed $226 million worldwide, and the second did even better with $376 million.

I want to know why the second film did so well? The only thing I can figure is that the target audience and demographic don’t care one little bit about the story, but, you know: MAGGIE GRACE IN SWIMSUITS AND SHORT SHORTS! Also, things go boom!

Seriously, the film was not great and Joe’s review from last year echos my own thoughts.

With all that said, this does mange to get just a smidge of curiosity out of me:

No plot details have been revealed, although — contrary to Neeson’s fears — Kamen has said they’ll shake up the formula for the third film. “We’ve taken everyone we can take — it’s going to go in another direction,” he revealed last year. “Should be interesting.”

Okay, might possibly be interesting because if they kidnap Maggie Grace again, that’s just stupid.