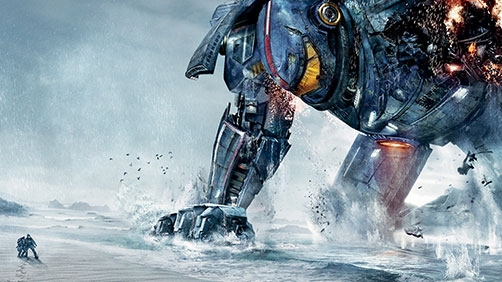 Whatever you can say about Pacific Rim you cannot say that it lacks vision, guts, story, or monsters (lots of monsters). It also doesn’t have a very complicated plot, but that’s not necessarily a bad thing.

I went into this film with slightly elevated expectations than I had originally set for myself when I saw the first couple of trailers, but they still weren’t extremely high expectations. The idea of a monster movie with big, crash ‘em, mash ‘em robots sounds like the ultimate summer blockbuster movie in the same legacy left to us by the horrible Transformers franchise. Thankfully, this film is far above and beyond anything that Michael Bay ever delivered to us in those pitiful films.

All that said, you should make no mistake, the primary foundation on which this movie is positioned is the crazy, over-the-top action. It is the fact that buildings are demolished, monsters spit crazy acid at things solid objects so that they melt, and big plasma guns makes lot’s of pretty CGI and noise. But mixed in and around with all that is quite a lot of heart, and drama, and human interaction.

In the apparently not too distant future, the Kaiju will come, and they will begin wreaking havoc on our cites, buildings, landscapes and the like. Oh, and they are big — really big monsters. The only thing that will stand in their way are the Jaegers — giant robots controlled by, not one, but two people, their minds melded together to control the robot beast bigger than most buildings. This will keep the Kaiju at bay for a short time, but eventually, the beasts coming up out of the ocean are bigger, more powerful, smarter, more overwhelming than the Jaegers can handle. It seems to be the end of our civilization. But in a last ditch effort, and with only four Jaegers left, a few brave souls will attempt to go down into the pacific ocean and drop a bomb into the rift from whence these Kaiju come, cutting them off from their route of attack upon our fair planet.

Let’s start with the good, and that is primarily that this film is driven by good story, and not driven primarily by the action. Yes, there may be a lot of action, but not once is there a crashing, mashing scene that does not make sense to the plot. Then too there are characters in this film that we like, or learn to like. In many ways we learn what motivates them, we pick up on their flaws, and we weep for them with their personal tragedies. Good story is at the heart of all good films and this film does admirably despite it’s summer blockbuster status.

The characters felt properly motivated, and while, yes, del Toro employs some caricature in his characters, at the same time he managed to infuse them with real personality.

And there’s sacrifice. It’s not the type of film where everyone comes home. Characters that you learn to love by the end of the film are going to have to be sacrificed to save the world. High stakes makes for great drama. And we have that here.

One of the other things I enjoyed a lot is they took the time to set up the film and the story properly. It did not feel as though this film rushed headlong into the action before we even knew what was going on (cough Man of Steel cough). There’s action fairly early in the film, but it doesn’t feel rushed into.

And even beyond the opening of the film, the entirety of the film felt properly paced.

At the same time, the film has it’s flaws. Let’s start with the film’s primary conceit, that for some reason, piloting these machines via the futury neural interface whatchamagadget is too much strain for one person. Therefore, we need two people to memory-meld together and pilot the robot. Yeah… it doesn’t make a whole lot of sense. You’ve just got to buy it and move on. But that’s not the worst part about “The Drift” as this process is called. No, the worst part is that this plot device, once established, was not used to it’s full potential. It really doesn’t have a lot of bearing on the end of the film.

You see, in order for the thing to work together with two pilots, they have to meld their minds together in “The Drift” and they can (sort of) think as one, but they can see more than just each other’s current thoughts, they can see memories, state of mind and more. But this plot device was really only used once in the middle of the film when one of the pilots is overwhelmed on the first time and there is nearly a catastrophe from it. And then that’s it. It’s barely ever part of the film again, other than that it’s just there. I really wanted it to be used somehow to bring the film to it’s conclusion, to somehow give our protagonists an advantage over the Kaiju, but no such luck. In the end, it’s just about blowing everything to pieces.

In addition, there are definitely some action set pieces that really leaves the logic side of your brain in a quandary:

Dumb side of brain: “Whoa! Did you see that? That was totally awesome, look at all the stuff going boom!”

Logic side of brain: “Yeah, but think about it, that made no sense. No piece of technology can survive so handily being dropped from miles up in the air.”

“Hey, Kaiju, you just hang out right here while I fire up my elbow rocket so that this punch will have a bit more oomph!. Now don’t move, I want this to have maximum impact!”

Also: Gypsy Danger was so badly damaged toward the beginning of this film that it’s almost silly when Charlie comes back to pilot a Jaeger, and it’s his old one, and it’s like there’s some sort of connection or whatever and a), it would have to have been like, totally rebuilt, and b), the film did not earn this. Who cares about the robot?

One more thing. What’s with helicopters carrying the Jaegers where they need to be in order to do the fighting? These things can travel on their own. Not to mention, these Jaegers are way bigger than any large building today, there’s no way just a few helicopters of normal size could actually carry these things. And even if they could, what were those suspension cables made of? Transparent Aluminum?

But you know, in the end, the bad didn’t matter too much. I enjoyed every second of this film. It’s fun and entertaining, there’s human drama and heart, and it’s actually original and not a reboot of something. Plus it doesn’t spend the whole film setting up a franchise so that they can actually tell a story next time (again, I reference Man of Steel).

This film is a solid win and certainly worth watching.