‘Pacific Rim’ - No Director’s Cut, But There Were 3 Endings 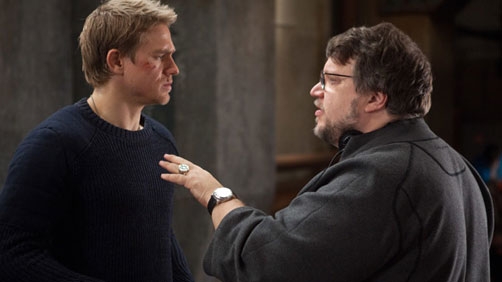 As Del Toro tells Badass Digest, he filmed three different scenarios for the concluding moments with Charlie Hunnam and Rinko Kikuchi. “When I was working on the movie we had three or four different versions of the relationship between Charlie and Rinko because I wanted to see if I could make a story about two people liking each other without having to end in a kiss,” he explained. “So when I shot the ending we shot three versions. I’ve never done this before, but instinctively I thought we should do three versions. We did one version where they kiss and it almost felt weird. They’re good friends, they’re pals, good colleagues.”

As far as that part of the film goes, it was fine as it appears in the theatrical version now. Also, I don’t often like directors cuts. There are exceptions, and if the stuido was overly stingy and there actually is good story to tell, then by all means, give me a director’s cut. But when a film is done correctly, usually the stuff that was cut was indeed cut for a reason and the film “should” be better off for it.

Also, this is fun:

“There was a line that I deleted from the movie that will come back if I do a second movie. Newt explained that the Kaiju are not carbon based organisms like humans, they are silicon based. The only part I left of his explanation is that they have a hive mentality, meaning that if you ‘drift’ with a Kaiju brain, you are drifting with every Kaiju alive,” he toldBleeding Cool. “Depending on the duration of the drift the information might be complete or incomplete, but the Kaiju know everything the human drifts with them knows. That’s as much as I can tell you without spoiling the sequel. Well, that’s providing there is a sequel – if there isn’t one, I promise, I’ll spill the beans.”