Russell Crowe Would Do ‘Man of Steel’ Prequel 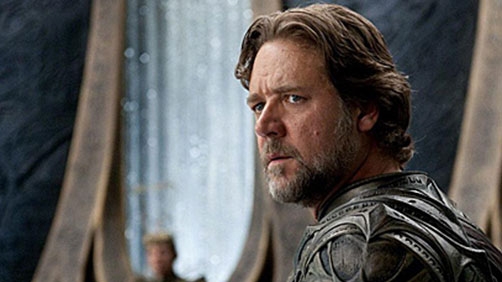 Russell Crowe has been receiving a lot of questions from his fans on Twitter asking him if he’d consider reprising his role of Jor-El from Man of Steel in a prequel and the actor says he’s game.

“A lot of you are asking about a KRYPTON prequel, if that’s something you feel strongly about let @Legendary pictures know your thoughts,” he said. He added, in response to someone, “Just getting sick of reading the same question mate, however, if it came up, i’d give the tights another go.”

Huh. Now that’s an interesting thought, although I find prequels to often be very challenging, particularly in situations like this; I mean we already know what happens to the guy, right? Sort of takes the wind out of the sails. To top it off, Man of Steel was not a good film, in my opinion (but I’m just opening myself up for the comment war here), so why bother?

But we’re going to be getting more from this universe simply because of how much money it made and how many people did like it, so I might as well weigh in and try to use all my weight and influence (hahahahaha) to get a good film made, one I would want to watch, and I think overall that a prequel with Russell Crowe might be an appealing film to me if done right (and if someone other than Zack Snyder directs based on what I’ve seen of his vision of the Man of Steel world).