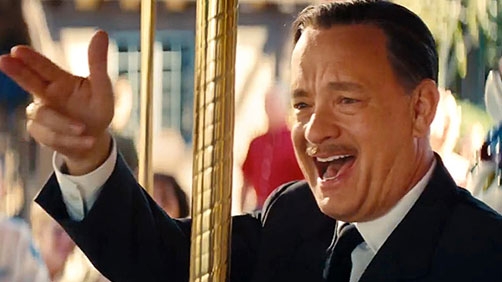 Who doesn’t know that Mary Poppins is a magical singing nanny who uses a bunch of made up words and cheers up children and unites them to their father? Of course we all know because of the beloved 1964 film titled just that, Mary Poppins. I must have watched the film 100 times growing up, though I haven’t seen it in years (and I can still hear Dick Van Dyke singing Chim Chim-in-ey whenever I hear the name Mary Poppins).

Well, apparently there’s a backstory on how this film came to the screen, and if the trailer and story is to be believed, P.L. Travers took some convincing to let Walt Disney put it on that screen. Ultimately, I think we’re all glad that he did, even if I saw it a few too many times and really don’t exactly want to watch it again, yet it’s a bit of a beloved part of my childhood. The trailer makes the film look mildly interesting in any event. We’ll find out this Christmas.